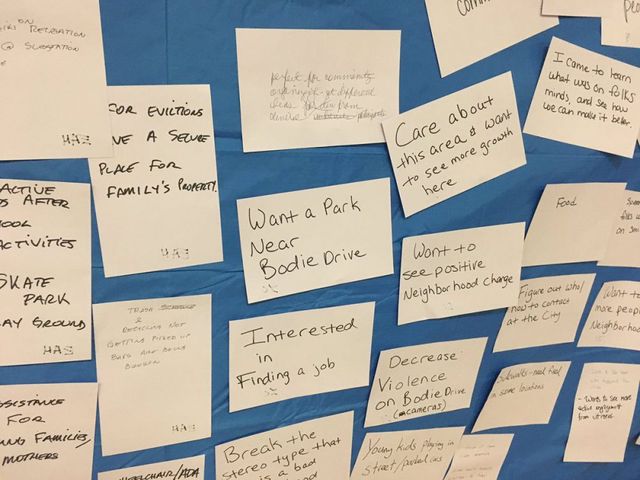 COLUMBIA - Residents from Columbia's North Neighborhood met on Thursday night to talk about their community concerns with officials from the city.

Neighbors broke into groups to talk about and write down issues that were important to them. Organizers said the problems that residents wrote down will be used to create change in the neighborhood. Issues that community members brought up were police response time, safety, jobs, community centers and neighborhood associations.

Elisa Glick, a strategic partner with the City of Columbia, said a lot of the issues that residents talked about were things the city is already aware of. She said it was important to listen to residents' needs.

“What we're about is empowering the residents to make the changes that they think are most important and the things that will help them to build a better future,” Glick said.

Nikki Mcgruder, another strategic partner with the City of Columbia, said the city can't create solutions without public feedback.

“I really hope the residents feel that their voices are what we really want to hear and their concerns are what we’re really interested in learning about. Because this is not going to work without their feedback and them being candid in their responses and giving us the information that we need,” Mcgruder said.

Columbia Police Department Community Outreach Unit Officer Scott Lenger said residents talked about crime that they already know about. He said hearing their concerns was important to him.

“We hear them. We see it. Sometimes we’re stretched a little thin,” he said. “What’s important to them is important to us since we serve them.”

Organizers said they want to turn the conversation on Thursday night into action. They said they will do this at the next North Neighborhood meeting on Feb. 7.

“Everything we do, we need to move the dialogue to action and that’s where we’re going next,” Mcgruder said.