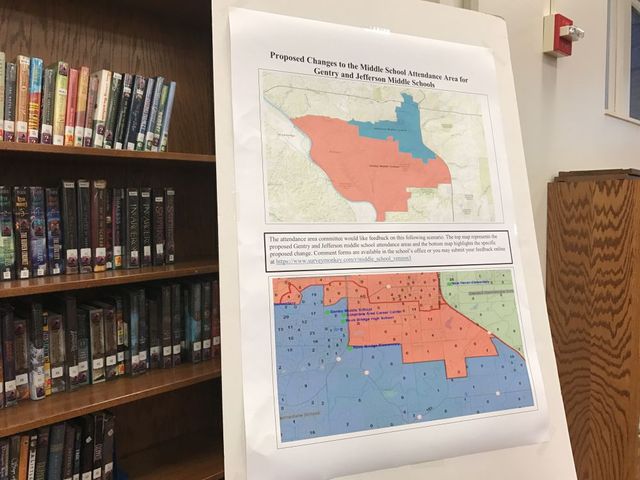 The proposed plan aims to help overcrowding at Gentry Middle School, but the plan has some parents worried it would make a lot of kids move schools next year.

One Columbia parent told KOMU 8 News this isn't the first time he has experienced this.

"This is the second time in eight years that we've purchased a house in the Mill Creek/Gentry school district. This is the second house we are probably going to have to sell again to try and keep my son where we would like him to be," David Brown said.

There were originally two proposed scenarios, both taking about 125 students from either the Thornbrook neighborhood or the Copperstone/Mill Creek area and moving them from Gentry to Jefferson. The boundary committee said these plans received a lot of push back from both neighborhoods.

The newest plan will only remove approximately 60 kids from Gentry and move them to Jefferson.

One parent said her daughter does not adapt well to change.

"For the first time she is loving school, she is very happy, and she has made friends. She's even bonded with some of her teachers," Jen Harper said. "She's very happy there, and suddenly she's being told she's going to have to transition again and move away from all of her friends. That is just devastating to her."

According to parent Becky Spicer, Columbia has a history of redistricting controversies and argued her children's education is at stake.

"Our kids don't have to move, but now they will have classrooms of over 40 kids, and that is not fair to my children," Spicer said.

Jonathan Sessions, Vice Preisident of the Columbia Public School Board, said that he attended the meeting to listen.

"The committee will get together, hear feedback from the community, and look at any concerns. If anything rises to the surface and might need to change, we will look at modifications. And if neccessary, they will rework the scenario before they present it to the board," Sessions said.

There will be another meeting at Gentry Middle School on Thursday, January 26 at 5 p.m.

An official decision will be made in February.