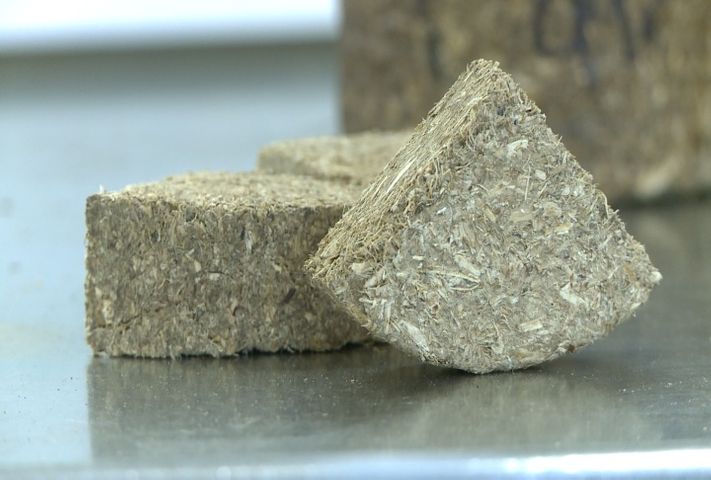 COLUMBIA - After three years of work, Nancy Heimann will soon see if the biomass fuel she makes is something the city can use. Biomass is made from materials such as coffee grounds, wood chips, corn refuse and grasses. The city will be testing to see if these materials can burn in the Columbia Water and Light's Power Plant sometime next year.

The biomass pellets would be used in addition to coal, which is currently the primary energy source. Columbia tested the use of biomass from a different company last year, but the materials broke apart and burned too quickly. Now, Columbia is working with Enginuity Worldwide LLC, where Heimann is the president. She says her product won't have the same problems as the last test did.

"What we do is we bind every fiber to every fiber using an innovative binder so we have much stronger durability and much more longevity," Heimann said.

This is a process for making biomass that's new to the industry. Heimann says the experimental pellets are bigger. They are designed to have the same shape and characteristics as coal.

"The future of biomass at the Columbia power plant is going to be determined by how well it acts like coal, so we don't have to be able to do a lot of upgrades to the plant," Connie Kacprowicz, spokesperson for Columbia Water and Light, said.

The product also has to be able to withstand the elements, because it will be stored outside.

"We think we have a good solution for that to take things that are on the ground and economically bring those to an engineered fuel so they can be used to supplement coal and give longer life to our coal fired legacy fleet," Heimann said.

"The National Renewable Energy labs has documented that certain biomass will have a carbon negative footprint," Heimann said. "That means we can use the energy inside that biomass and not involve any more carbon dioxide into the atmosphere."

If the test burn succeeds, the city will need to determine the cost and approve the purchase of biomass from Enginuity. Biomass materials are more costly than coal, which is a plentiful resource in the Midwest.

"There are ways to use biomass in conjunction with coal so that we do not raise the overall fuel price but a few percent but we get significant impact on the emissions especially on the CO2 emissions," Heimann said.

For the test burn, the city received a $50,000 grant from the American Public Power Association for materials and research. Biomass costs $350 per ton. The total cost of the test burn is $375,000.

"We really think that technologies that enable the bio-economy can really have a transformative effect in the rural areas of our state and others," Heimann said.

Enginuity works with Missouri Corn Growers Association to get materials like corn stover from local farmers. Corn stover is the waste product left on the ground after corn has been harvested. For the test burn, the materials will come from the Missouri river bottoms.

Heimann says the test burn will take a few months and the city is planning for it in the summer.