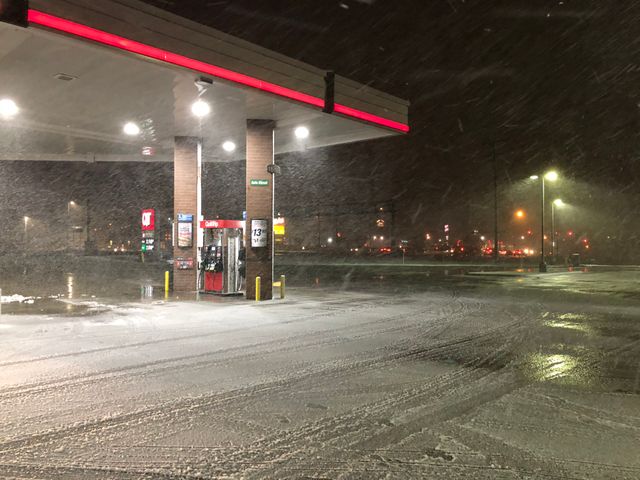 COLUMBIA - The city of Columbia and travelers prepped for poor driving conditions due to the blizzard forecasted to blast through the area Sunday.

Columbia's plow trucks were set to go out at 2 p.m., but treatments for the road depend on weather.

"Whenever there is a significant rain forecast before a winter event, you're going to waste a lot of resources if you dump a lot of salt on the road and it just washes away," said Columbia Public Works community relations specialist Barry Dalton. "As soon as it stops raining, they'll immediately begin treating all roads, bridges, intersections, curbs and hills on the priority routes."

The Missouri Department of Transportation also could not start treating until the rain stopped, according to assistant district maintenance engineer Paul Denkler.

Columbia Public Works has about 500 miles of major, priority roads in the city that it is responsible for treating and MoDOT handles the rest.

"That's where most of the traffic jams would occur, that's where the crashes with fatalities or severe injuries would occur. We need to get them near normal," Dalton said.

After the city clears priority routes, it will start to treat another 880 miles inside Columbia city limits.

"Our goal is for all city streets to be passable by a front-wheel drive vehicle as soon as possible," Dalton said.

Drivers in Columbia were out earlier in the rain, hoping to be inside by the time the snow came along.

"It's time to try to get ready for winter," said resident Terry Lyons. "I'm getting ready to go bust up some wood for the fireplace."

He said the weather did not change his plans, but made them more miserable.

MU student John Finn said he had to leave St. Louis to head back to campus earlier than usual due to the weather.

"I know with the roads around here they get pretty slick. In the past, there's been a little trouble driving around," he said.

He said he was also getting in his errands before the snow set in.

If Columbia reaches two inches of snow, cars cannot park on the priority routes. The city is urging those who have cars parked on these routes to move them as soon as possible.

"We try to make people aware that it's time to move those cars. We try to do everything we can to avoid towing. But if push comes to shove, we need to get those priority routes near normal condition and the only way to do that is to get the cars off of them," Dalton said.

If the city does not get the cars off these routes, it becomes a safety and property damage issue. Additionally, Dalton urgers drivers to stay off the roads.

Dalton also asks drivers to be slow and not to tailgate or pass plow drivers.

To view the designated snow routes in Columbia, click here.