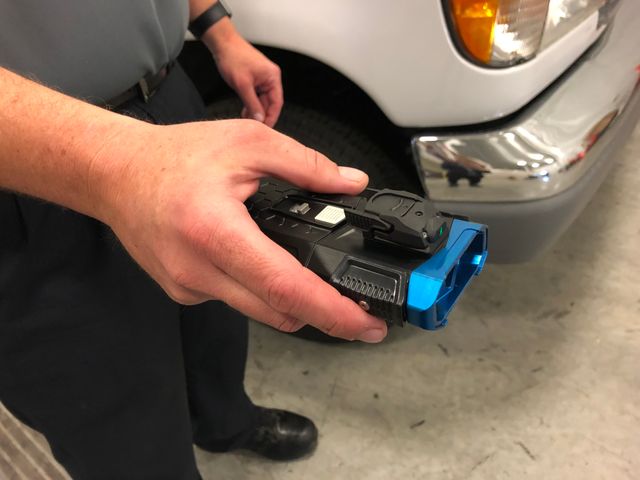 COLUMBIA - The Columbia Police Department will be field testing a new restraining device after evaluating it on Thursday.

The device is called BOLAWRAP 100. Wrap Technologies developed it as a different way to deal with someone who is having a mental health crisis.

"The issue of mental illness is real, and it's a growing issue we see across the United States," said Mike Rothans, senior vice president of Wrap Technologies. "We see it in every police jurisdiction, in every community."

The device is meant to be used before painful measures, such as pepper spray, a taser or gun. It's not meant to replace any existing tools, but instead fill a gap for police.

Rothans says law enforcement's response to people with mental disabilities "has to change from an idea of pain to gain compliance to restraint, where there's no pain involved."

The handheld remote device fires at about 640 feet per second, and can reach anyone within 10 to 25 feet. It wraps a person in an eight foot Kevlar cord.

Columbia Chief of Police Ken Burton said, "I think one of the things that attracts me to it is that it's non-pain compliance. It's not designed to cause pain, it's designed to help officers restrain someone that is in crisis. It gives officers an extra few seconds."

Burton said BOLAWRAP 100 appears to be very safe and something his officers would often use.

"Every day our officers are forced to encounter someone in crisis. It gives us one more tool to be able to respond to people who are not necessarily breaking a law but are causing a disturbance," he said.

Rothans said the device has the potential to cause harm, as does any restraining device.  But Burton said, as of now, he sees no issues with the device.

The next step will be to put the device in the field and test it in real situations. Then, CPD can give feedback to Wrap Technologies on what works and what doesn't.

Burton said, "I think that we'll take the lead. We're very proud to do that, and take the lead where it's a new product out there and we can show the rest of the state how to use them."

CPD invited other police agencies to Thursday's evaluation, and Burton hopes they will also decide to test the device. He said he's not completely sure who will carry BOLAWRAP 100 yet, but CPD will come up with a policy so sergeants and officers know how and when to use them.

"There's going to be situations where it just won't be usable, and that's the same with every tool that you have," he said.

Burton said he's never seen a product like this one before. However, it's not the first time CPD has tested something completely new to the market.

"I think we went through that phase, or law enforcement did, when tasers first came on the market," he said. "One of the things that I think police chiefs as a group did, was we put these in officers hands and we said go out there and do well.

Burton said, at that time, the department "didn't think about some of the potential pitfalls."

"We learned from that taser experience that you have to give officers policies, procedures and regulations so they know when it's appropriate to use and when it's not," he said.

The CPD plans to start with about ten devices, and will most likely begin testing in December.

"We're used pain compliance for years, and in a lot of instances pain compliance only escalates a situation, which is not our desire. But if something hurts, somebody's liable to get more combative in a situation that you're dealing with. If we can do something that doesn't hurt, then why not?" Burton said.