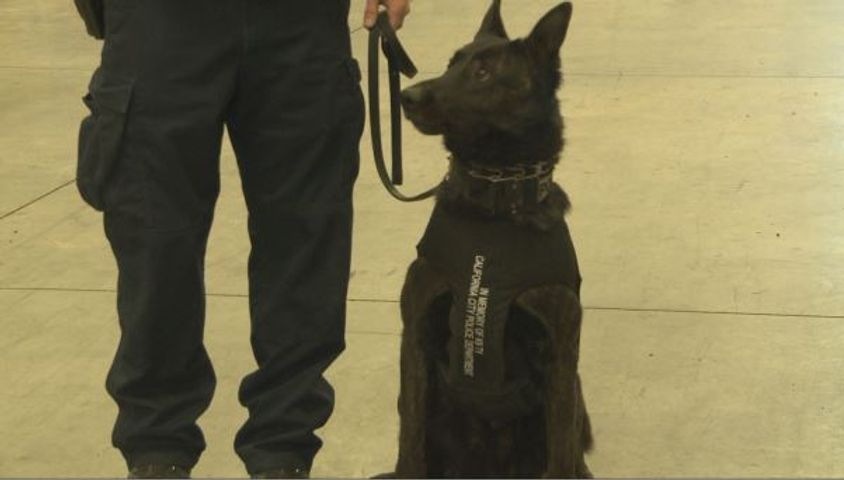 CPD received the vests as a donation from a nonprofit called "Vested Interest in K9s," an organization dedicated to collecting money in order to give out vests to keep police dogs safe.

Sgt. Scott Hedrick said he heard about the vests from another agency who received them, so he and his fellow K-9 handlers applied for them as well. Now, CPD has four vests, each engraved with the name of a K-9 who died in the line of duty.

According to a press release from CPD, each vest is worth up to $2,300 and requires a $950 donation to buy. With a price that high, it could have taken CPD awhile to get the money to purchase one.

"I think if we really worked at it, we would have been able to have been provided vests from CPD," Hedrick said.

As useful as these vests may seem, they aren't something the K-9 unit plans on using constantly.

"We'd only use them on high-risk, or a high-threat assessment of what we're doing, so the dogs wouldn't primarily wear them every day," Hedrick said.

He also said K-9s aren't often in danger of being hurt by humans. It's more likely the dogs could be seriously injured by serious exposure to heat or gastric torsion.

Gastric torsion is a condition in which a dog's stomach becomes twisted around and it happens seemingly at random. When a dog is affected, it can cause weakness, depression, and lack of appetite. Hedrick says previous police dogs have had to be put down after being inflicted with the condition.

Police dogs are at risk of all sorts of environmental dangers, as well. Hedrick's first K-9 partner had to be put down after it slipped on ice and twisted its spine.

He mentioned another occasion where a police dog in Normandy, Missouri was frightened by a clap of thunder and jumped off of a parking structure.

These vests are just the latest donation to the department; the K-9 unit receives help from all sorts of places.

Even though the vests won't be used all of the time, especially in the heat, K-9s Duncan, Gorrit, Raf and Kane can keep going to work every day and their handlers will know they're just a little bit safer.