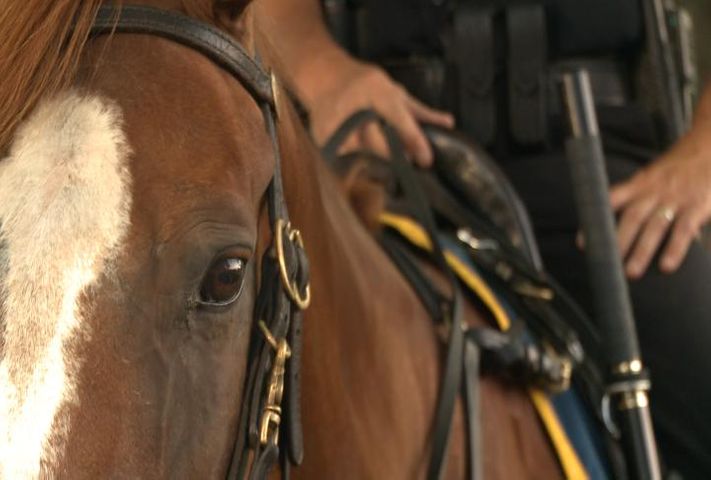 The horses are used for several reasons. Sergeant Joe Bernhard said, "The mounted unit is basically used for public relations."

The unit went on patrol in Columbia on Tuesday evening. Heads turned as the horses trotted down Ninth Street in the Downtown District. Adults and children stopped to take pictures with the officers and their horses.

There are also times when the horses are used for crowd control, Bernhard said.

The owner of a local bar said a stronger police presence could benefit the downtown district.

"I think that horses are fine and I am sure they have their effectiveness in terms of crowd dispersal," Matt McGee said. "But if we are talking about having more cops on the street if they are on bikes, horses or on foot I think all those are good solutions."

McGee said large crowds are noticeable at bar closing time in downtown Columbia. "When you close a bar a lot of people spill out on the street, we are talking about generally all the bars."

He said he does not see closing time as a problem, but thinks there needs to be a police presence.

"On the busiest nights certainly it helps to have people around to calm the crowd down should something go awry."

Bernhard said this type of patrol in the downtown area is used sporadically. It is used mostly for special events.

The department does not expect to increase the amount of mounted patrols because they are extra work on top of an officer's normal duties, Bernhard said.

He said a mounted patrol is similar to an officer on foot. "We can enforce the law just like any other police officer, we just have the added dimension that we are on a horse."

The major advantage is the officer has a better view, Bernhard said. This allows the officer to watch developing situations.