COLUMBIA - The Columbia Police Department is investigating an incident in which a Columbia Police patrol vehicle was struck by another vehicle on U.S. Hwy 63, between the intersection of E. Broadway and Stadium Drive, on Feb. 24 at approximately 12:30 a.m.

The other vehicle, a Pontiac Vibe driven by Kylie Rochel Shepherd, 25, of Kaiser, Missouri, caught on fire following impact. The two officers in the patrol car were able to help remove Shepherd from the burning vehicle, and the Columbia Fire Department arrived at approximately 12:39 a.m. to extinguish the fire, which they did. 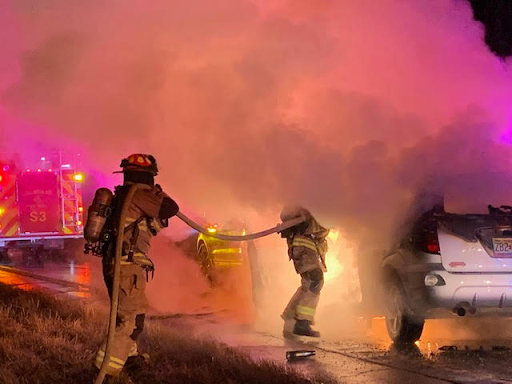 Shepherd and one of the officers seated in the patrol vehicle were transported by ambulance to a local emergency room for treatment of non-life-threatening injuries. The officer was released after medical treatment and Shepherd's condition is unknown.