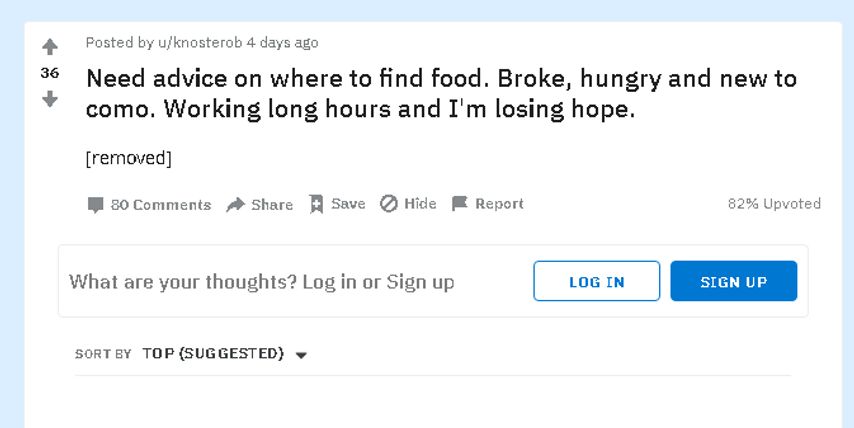 COLUMBIA - Users of the popular social sharing site Reddit are upset after they say a scammer targeted them--posing as someone down on their luck.

The original post, which has since been deleted, was submitted to a Reddit discussion forum centered on topics relating to the city of Columbia.

The user wrote they had recently moved to the area and had come across hard times. They said they were in desperate need of food, but their work schedule did not allow them to visit food pantries during business hours.

Multiple users, whose replies to the post can still be seen, offered to help the person.

"His story seemed plausible," one Reddit user, who wished to remain anonymous, told KOMU 8 News. "I offered to buy him a bag of assorted groceries."

He said he made arrangements to meet the person in a public place. He said after waiting at the location for 15 minutes, he gave up, assuming it was a scam.

"I guess I'm more annoyed at having my time wasted than anything else," the user said. "I'm not out any money, as I was skeptical enough not to offer any direct cash."

Another Columbia Reddit user, who also wished to remain anonymous, wasn't as lucky.

After other people reported similar experiences, Columbia Reddit users did some sleuthing. One user found similar posts made in Reddit forums for other cities, including Fort Collins, Colorado, Ames, Iowa, and Santa Fe, New Mexico.

"It's hard to search for other cities directly that they might be scamming but their pattern seems to be to hit up medium-small sized cities. Just big enough to where they'll get a receptive audience for their scam but just small enough that people won't connect the dots that they are doing this same song and dance in multiple city subreddits.

Some key similar parts to their scam sob story are:

The person who posted to the Fort Collins Reddit page claimed to have just started a job, but said they wouldn't be paid until the end of the week.

"Where I'm having issues is with food, gas and the fact that after contacting the United Way and the numbers they gave me for food banks and other assistance, I've found that everyone needs me to come during business hours," the post said. "There's a few that could help a little later, but there's no way I can leave work early."

The person did not ask for money outright, but made it clear they thought they were out of options.

"I keep on thinking there must be some organization that could help after 8pm and that maybe I just don't know the area well enough," the post said. "I haven't eaten since Friday morning and don't know what to do."

Moderators of the Columbia Reddit page as well as the Reddit pages for the other cities targeted by the posts have since deleted the posts in question, or locked users from commenting on them.

Columbia Police Public Information Officer Jeff Pitts said the department has not received any reports about the post.

Pitts said internet users should take caution when being offered or asked for money.