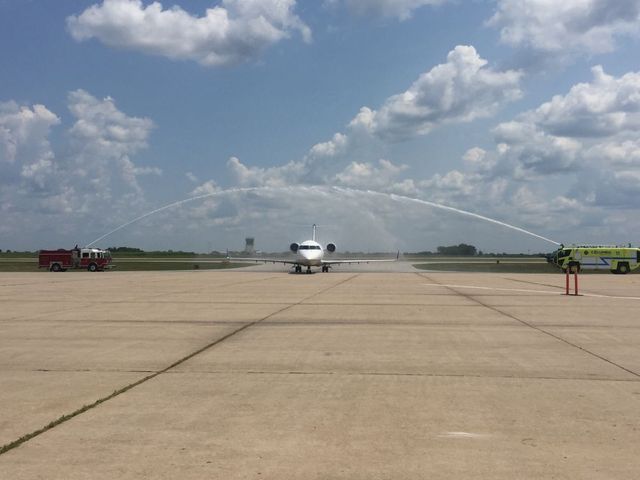 COLUMBIA – The Columbia Regional Airport held a celebration for their new partnership with United Airlines on Wednesday.

Earlier this year, city officials announced the airline would begin service out of Columbia to Denver and Chicago.

The first flight from the airline took off on Tuesday to Chicago. Today marked the inaugural flight from the Windy City. Many leaders from Columbia, Jefferson City and other surrounding areas attended the event.

“It really connects us, it’s so much closer and it also connects us as a region with Columbia and Jefferson City so it’s really a great day for Mid-Missouri,” she said.

Tergin also said Jefferson City will benefit from the commercial aspect from these new flights.

Greg Cecil, a member of the airport advisory board, said he is happy their work has come to fruition.

“This is great, we’re really excited about this,” he said. “This has been our goal for the past few years to get another airline and we’ve secured one and it goes to destinations that folks in the area want to go to.”

Cecil says one problem they might face is the airport size.

"Our challenge right now is our terminal is a little small, it's a little tight," he said. "But we're hoping we'll be able to work through all that and figure those things and try to get a new terminal built as quickly as possible."

Bookings on United now include flights to 48 out of the 50 states and 45 different countries.