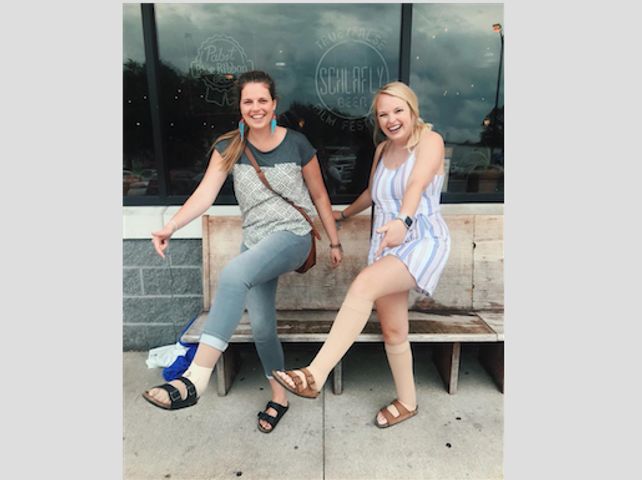 COLUMBIA - It was a normal day in Megan Stober's American Sign Language class at MU.

Her final project was to sign any song and perform it for the class. She aced her performance and shared the video on Facebook for family and friends.

Little did she know that video would be viewed almost 4,000 times.

"I clicked on her Facebook page and there was an article written about her. It was just crazy because I was reading it and thought this sounds like my life, and that's just so rare," said Stober.

Stober was diagnosed with primary lymphedema in winter of 2016, but has dealt with symptoms her entire life. When she was child she knew she had a swollen foot, that her family would call her "puffy foot," but doctors did not know what it was until she was in her twenties and the swelling increased.

"Sophomore year, I went to put on my boots that I was wearing the entire year before, and they wouldn't fit on my ankles," said Stober.

Hannah's story is a bit different although the result is the same. She was born with primary lymphedema in her left leg, and diagnosed at ten-months-old. At the time, there were only two lymphedema specialists in the United States, so her parents flew her to New Jersey to get treatment.

Although there is no cure for primary lymphedema, there are ways to keep it from getting worse.

To help control the swelling, people with lymphedema often wear compression garments. Stober and Hannah both wear knee-high socks to help keep the swelling down in their legs.

"We both understood all the stares you get from wearing compression garments. It was so nice to meet someone my age with the same struggles," said Hannah.

Hannah happened to be visiting Columbia this summer and met up with Stober.

"We clicked right off the bat. We had so many things to talk about. I felt like if she lived close to me we would be great friends," said Hannah.

Stober decided to sign the song "A Million Dreams" from "The Greatest Showman" because she felt that the movie is about empowering people who are not in the position of empowerment. She knew when she was diagnosed, it would begin her passion for disability advocacy.

"It just breaks my heart thinking that people will live their life differently because of a diagnosis. I would just say wear your compression garments and go out and be confident because you look good in them!" said Stober.