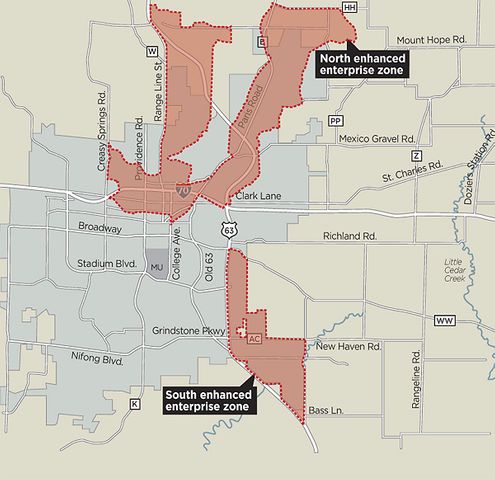 COLUMBIA - One of the areas in the middle of Columbia's ongoing argument over 'blighted' areas and Enhanced Enterprise Zones, or EEZs, met Thursday to discuss the issue.

The city is considering deeming two areas of Columbia "blighted" so that it can put tax incentives in place to encourage business growth in those areas.

Residents in the proposed southern zone met at the Lenoir Community Center Thursday afternoon and heard arguments both for and against the program.

Bernie Andrews with Columbia's Regional Economic Development, Inc. explained the potential for the EEZ program to bring manufacturing and low-skill jobs to Columbia by giving companies a break on property taxes.

Then, Dan Hemmelgarn with the group Citizens Involved and Invested in Columbia, or CiVic, explained his concerns that public education would suffer from the change, since property taxes fund Columbia schools.

Residents asked both men questions after the presentations.

City council member Barbara Hoppe also attended the meeting, as the southern zone is in Ward Six, which she represents.

Citizens shared their opinions as well.

Hal Virgen, who has lived in Columbia for 11 years, said the program would help get kids jobs who would otherwise be causing trouble in the community.

"Here in Columbia, our biggest problem are the kids who don't have a job, who don't have education, and who don't have a chance. You need to get manufacturing jobs or training jobs in here that will get those kids a chance and a break to get started...EEZ can do that," said Virgen.

However, several residents expressed concern with the lack of data supporting the claim that EEZ tax breaks bring companies to town.

"There is no data to show that tax abatement is going to bring companies here, because they look at so many other things like how available is the workforce? How educated are the people? Is this a good place to live? Those are all more important than tax abatement on where a company is locating," said Columbia resident Linda Green.

Green added, "We don't need EEZs to bring people here. We don't need to give away our taxes to essentially bribe companies to come here, because this is a great place, and education is one reason it's so great here."

The Enhanced Enterprise Zone Advisory Board will hold a meeting November 14 to further discuss the program before it gives its recommendation to the city council sometime in December.