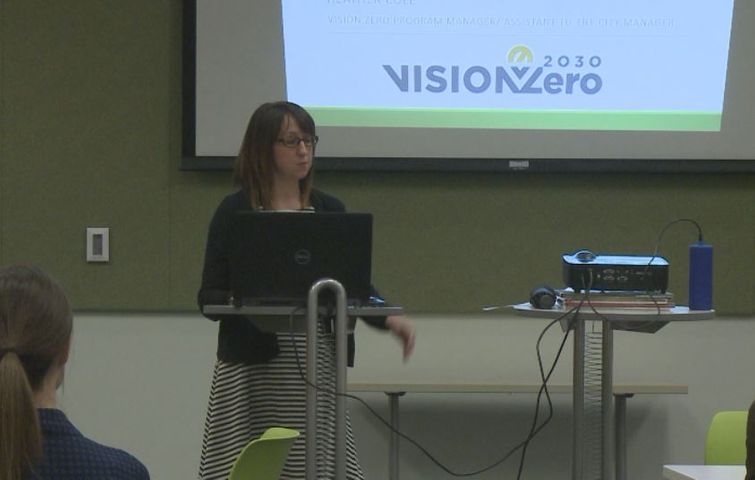 COLUMBIA – Columbia residents got their say Monday night on how to make zero traffic-related fatalities a reality.

Residents of the 4th Ward met with Columbia City Councilman Ian Thomas in a town-hall meeting at the Daniel Boone Regional Library in Columbia to discuss possible safety improvements as a part of "Vision Zero."

"I want to hear from constituents about where they think the biggest changes are needed," Thomas said.

The PEDNET Coalition, a group that advocates for the safety of non-automobile traffic, is working with city on the project. The group helped the city organize the town-hall meetings.

The goal of the program is to eliminate all traffic-related deaths by 2030.

"Over the coming years we expect and plan and want to see those numbers going down each year as we take steps to slow down traffic, to improve compliance with speed limits and to education the public, both motorists and other road users, on how to do so safely," Thomas said.

The program was adopted by the Columbia City Council in December 2016. Columbia is one of 34 "Vision Zero" U.S. cities. It is currently the only one in Missouri.

"Vision Zero" was started in Sweden in 1997 where it greatly reduced traffic collisions and fatalities. Due to its success, New York City adopted the program, becoming the first city in the U.S. to join "Vision Zero" in 2014. New York City set a record for fewest traffic fatalities in 2017.

Thomas said the city is looking to achieve "Vision Zero" by combining enforcement, education and engineering. He cited the city's December 2017 ban on distracted driving as one of the steps being taken to make the roads safer.

This was the first of six meetings, one for each ward. The meetings will take place at various dates and locations in Columbia throughout January.