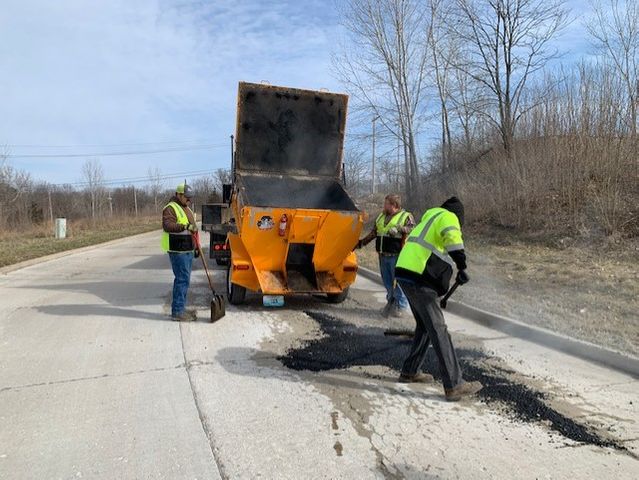 COLUMBIA - While the snow disappears with warmer weather, potholes are opening in roads around mid-Missouri.

"Our crews are out working hard", said Public Works spokesman Barry Dalton. "If it's not snowing or raining, they're out working and fixing potholes as quickly as they can."

According to the City of Columbia website, the city maintains 1,350 miles of streets. Potholes tend to occur much more often during the winter season, with unpredictable weather and heavy snowplows wreaking havoc on local roads.

The street division patches the roads by traveling to areas reported by citizens, and filling the potholes with a "hot mix" made of crushed asphalt. The street division loads the hot mix into a mobile "hotbox" to keep the mix heated, and drives it through Columbia, filling potholes as they go.

"We've gotten a lot of calls recently just because of the weather," he said. "They're doing their best to get the hot mix out here and get the potholes patched as quickly as possible."

Nyah Stokes admits she is not a good driver at the best of times, but says the potholes make it even worse.

"I'm a bad driver anyway," she said, "so it makes it really difficult to avoid getting in a wreck."

William Anderson says he damaged one of his tires driving over a pothole near the Columbia Mall.

"Coming off the back road, I messed up my tire." he said. "Right in the middle of the street, and it was a big hole."

Anderson also said he thought the city should help pay for his tire. After all, it's their street.

A spokesperson for the Columbia Risk Management Division said the city will only pay to repair cars damaged by potholes if the situation meets three criteria:

1) The street is maintained by the City of Columbia.

2) Public Works had been informed about the pothole.

3) Public Works had been given adequate time to "address" the pothole. The Risk Division stressed the city must have "addressed" the pothole rather than necessarily having filled it in. This is to account for inclement weather or inadequate supplies.

A member of the street division crew also told KOMU the patched roads may stay for over a year, weather permitting.

"It could stay until next year," he said. "The water and the heating and cooling is the biggest problem."

Anyone wanting to report a pothole in Columbia or on state roads can do so by filling out a report form on the city website.