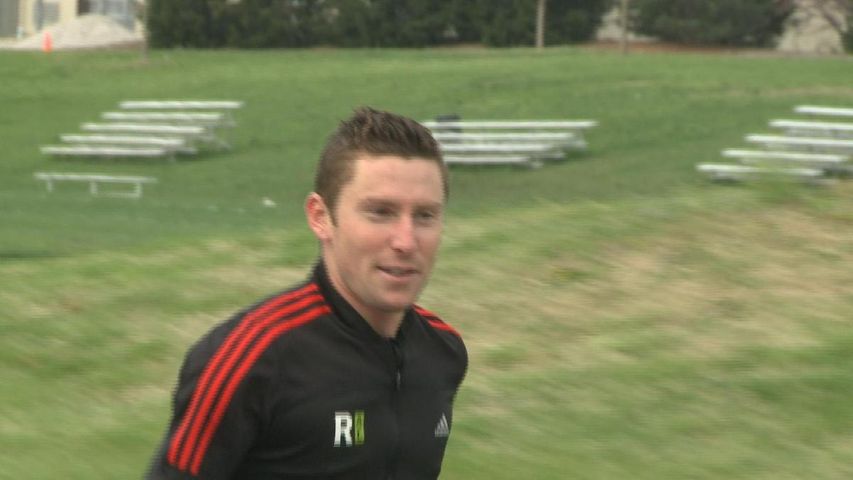 COLUMBIA - For most, running a mile in fewer than six minutes would be exciting. For Scott Macpherson, a professional runner, that's practically walking.

Macpherson competed in the Boston Marathon April 21 and ran 26.2 miles in 2 hours, 17 minutes, and 46 seconds. He started the race in 34th position and finished 19th.

Though slower than his goal, Macpherson said this year's marathon was more than just about the time.

"I cannot describe, it's so hard to put into words what that emotion was in that town this year," Macpherson said.  "I'll never experience anything like that again I don't think."

Last year, Macpherson watched on TV as runners and onlookers were injured near the finish line because of the bombing at the marathon in 2013.

"When the bombs went off, I was right there glued to my TV," Macpherson said. "I called my coach almost immediately the next day and I said, 'Hey, we're running the Boston Marathon next year.'"

Both Macpherson and his fiancee, Casey Jo Magee, said this year's marathon was emotional.

"[Bostonians] just have this heart and this passion and they're out to prove that you can't bring us down," Magee said.

"You landed [in Boston] and you felt it," Macpherson said. "Everyone had a different vibe, they had a strut, and they were saying 'Hey we're Boston, and you messed with us once and you're not going to mess with us again'."

Macpherson, a two-time SEC Champion and three-time All-American at Arkansas, qualified for the Olympic Trials in 2012 because of his half-marathon time.

"It was the worst race of my life, it was absolutely awful," Macpherson said. "It was my first marathon ever."

Macpherson plans to run two marathons per year, and continues to train in Columbia. As a member of Team Rogue, a professional running team, he also spends part of his time training in Austin, Texas.

He's already qualified for the 2016 Olympic Trials. Now, it's about working toward his goal of running a marathon in 2 hours and 12 minutes.

"If I'm not progressing then why am I doing this," Macpherson said. "It's a dream come true [to be a professional runner], but it is hard work."

Macpherson's next marathon will be October 5 at the USA Men's Marathon Championships in Minneapolis.