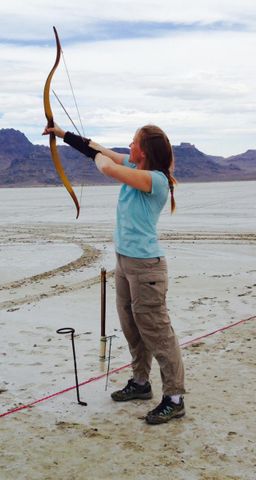 COLUMBIA - Flight Archery isn't a well known sport in mid-Missouri. In fact, it's not well known anywhere, but that has never stopped Columbia resident Candy Sall.

"The shooting is a bit different, we're not aiming at targets," Sall said. "We do shoot at a 45 degree angle to get maximum distance."

The objective of flight archery is to shoot an arrow as far as possible. It's one of the oldest known sports, dating back to the 15th and 16th centuries during the Ottoman Empire.

Sall does it better than anyone.

Sall broke the record in the 2014 Flight Archery Championships at the Bonneville Salt Flats in Utah last August. Her shot traveled 802 feet, almost the length of three football fields.

"I was quite surprised when we were measuring the arrows that they said. 'Hey Candy, that's yours and we were out past 800 feet,'" Sall said.

That's because flight archery is just a hobby for Sall. She is the associate curator at the University of Missouri's Museum of Anthropology.

"I've wanted to be an archeologist since I was 12," Sall said.

Her assistant curator, Jessica Boldt, was just as surprised.

"She was into archeology and she was my boss, and I didn't think of her as a sportswoman," Boldt said.

Sall said she also doesn't get a lot of practice.

"It's hard to practice flight archery in Missouri - there's not a lot of empty space where you won't lose your arrows or endanger someone else," Sall said.

Sall got into flight archery about three years ago after some time working with the Grayson Archery Collection in the Museum of Anthropology.

"We have the world's largest archery collection," Sall said. "We have a collection over 5,000 pieces, 6 continents, a lifetime."

"When you are around it all the time and you're looking at all of these different pieces, it's really difficult not to want to try your hand at it," Boldt said.

Flight archery drew Sall in the most.

"She started kind of exploring some of the pieces that we have in our collection and learning the history behind them, and that's what led her into this flight archery," Boldt said.

"You can't miss cause gravity always pulls your arrow down," Sall said.

"I never thought I would hold a world record." Sall said. "I just wanted to beat last year's scores!"