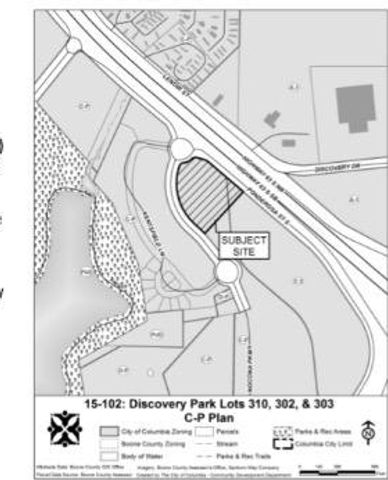 A 3.86 acre lot located on the western side of Highway 63 and north of Discovery Parkway south of the roundabout at South Ponderosa Street and Nocona Parkway. This site could become the location of a new hotel and two new franchise restaurants, if city council approves the plan on June 1.

Planner Steve MacIntyre discussed the layout design with Civil Engineer Michael Hall Tuesday evening. The Planning and Zoning Commission will approve a final plan on May 7 before sending it off to city council to hear on June 1.

Once the comments are finalized, Hall will adjust the plan as necessary before presenting it to the Planning and Zoning Commission.

MacIntyre said, "At this point I anticipate all the comments to be fairly minor in nature, more technical review comments that he will address."

Hall said he does not expect any substantial changes to be made to the design layout between now and the finalized plan presented May 7.

"This should pay for itself and some," MacIntyre said in regards to the entire development over time.

MacIntyre said he expects the hotel to be five stories high with around 100 rooms. Hall said there are no specific restaurant franchises chosen to be included in the plan.

If the finalized plan is approved by the Planning and Zoning Commission on May 7, the final decision will be made by the Columbia City Council on June 1.