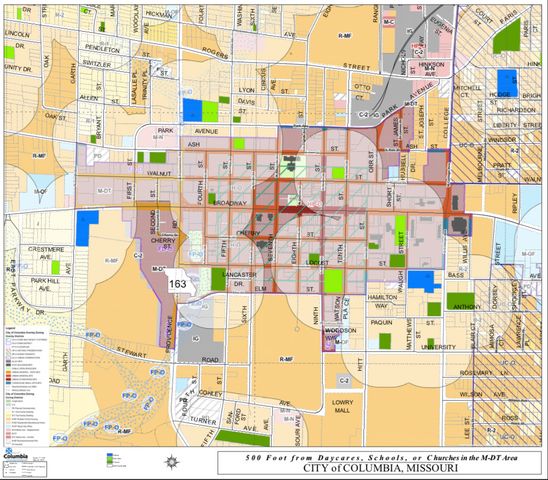 Council members will hear the planning and zoning commission's proposal that requests a 1000-foot buffer between these facilities and schools, daycares, and churches. This provision has been heavily debated as the buff would restrict any location from opening downtown.

Community members have presented options of a 500-foot and a 250-foot buffer to the commission at previous meetings. This would open up options for downtown stores in the future. They also argue it would make these facilities more accessible to patients.

The 250-foot buffer option would allow a location just around the corner from Yellow Dog Bookshop on 9th Street. Co-owner Joe Chevalier said he's okay with it.

"I wouldn't have a problem having it so close. Most of the smell would come from the act of smoking, my impression is people would purchase marijuana there and take it home."

"The current proposal seems too restrictive and designed to prevent any easy opening of any facility," he said. "Since the voters seem okay with their presence, I don't see why we're making it so difficult for them to open.'

City council members can make changes to the planning and zoning commission's proposal, but will have to ultimately meet state regulations. The state has not decided on its regulations yet.

St. Louis and Kirksville have both eliminated buffers altogether while Ellisville, Creve Coeur, and St. Joseph have all reduced it to 300 feet.

Monday night is just the first reading on the commission's buffer proposal. The next step is a public hearing during the city council's June 3rd meeting.