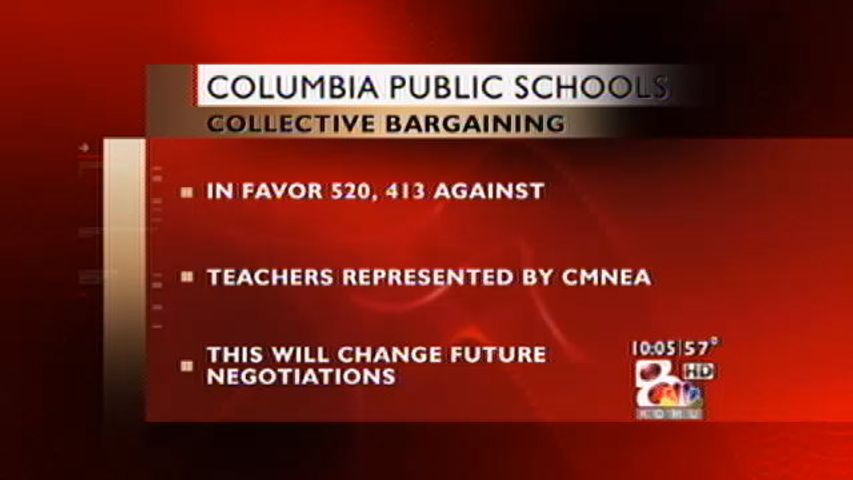 COLUMBIA - Columbia teachers will have exclusive bargaining rights for the first time in city history.

Teachers had two choices to vote on Thursday night.  The first option was to have Columbia Missouri National Education Association (CMNEA) as the exclusive collective bargaining representative.  The second was to let the negotiating process stay the same with multiple groups. CMNEA won by a vote of 520 to 413. By removing other groups, specifically Columbia Missouri State Teachers Association (CMSTA), future negotiations will be tweeked.

"It just formalizes that whole process on wage, salary, benefits and work conditions," Superintendent Chris Belcher said. "Where as with meet and confer, it's a lot more informal and discussive."

Belcher added that CMSTA "won't have an official spot at the table for benefits, compensation and working conditions."

"We're disappointed.  We were hoping for a different result," CMSTA President Kari Schuster said. "We believe a multiple approach would have been better in making sure all voices were heard."

The previous system had roughly one-third of Columbia teachers covered by CMNEA, another third covered by CMSTA and the final third represented by neither, according to Community Relations Director Michelle Baumstark.

Belcher noted that the new collective bargaining decision isn't binding over the long run though.

"If the teachers in the general field don't feel represented, they can call for a vote and ask for another group to represent them or go back to the way it was every year.  Teachers' have the right to call for (a ballot.)  This is totally teacher driven," he said.