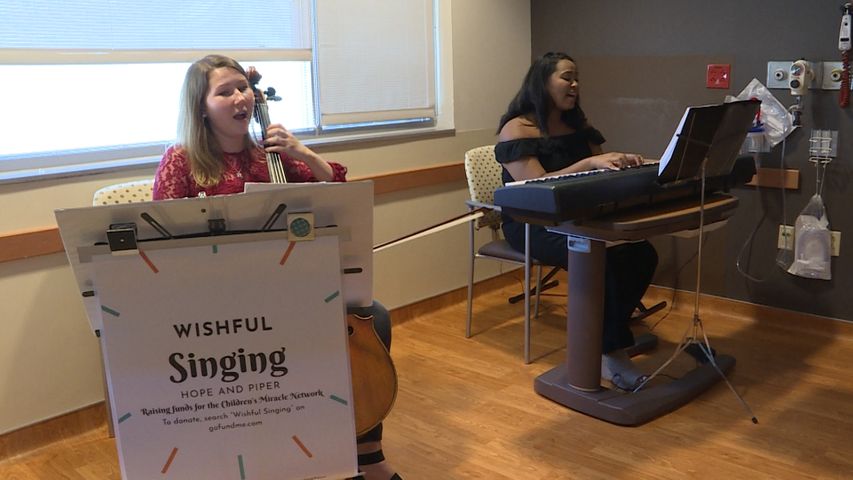 COLUMBIA - As Rock Bridge High School student Hope Keithahn headed into her senior year, she came up with an idea. She wanted to spend her summer performing at children's hospitals across the country with her best friend, Piper Page, before Piper headed to college at NYU.

"Service is really important for so many reasons," Keithahn said. "Just giving back to people creates character, I think."

Page said she quickly jumped on board with the plan for the unique road trip.

"She asked me if I wanted to go with her on this trip and sing and play at children's hospitals and I was like, 'Heck yeah, I want to do that,'" Page said.

The duo met at Rock Bridge High School in show choir. Along with singing, Keithahn played the cello and Page played piano.

"Performing is one of my favorite things to do," Keithahn said. "I wouldn't give it up for the world."

The girls left for their "Wishful Singing" tour in July and traveled from Boston to Salt Lake City.

"It was like a giant three week sleep over while also traveling the country," Keithan said.

They said they learned a lot about each other during their trip.

"Everything from how we both drive to like who likes to sleep with the fan on and who doesn't, like everything," Page said.

They also grew closer together.

And they grew to love the unique performance hall. They played at children's hospitals in Boston, Chicago, Des Moines, Denver, Washington, DC and Salt Lake City.

"Seeing the kids reactions as we played was like, that's life changing right there," Page said. "You could tell that you made a difference in their day and that they would hopefully think about that for a long time."

"Seeing them stop there and just like smile and listen and even if it was just for 2 seconds, it was really fun to experience," Keithahn said.

For the last performance of their tour, they played at the Missouri Orthopedic Institute in Columbia in the pediatric wing.

"Patients in these hospital settings are longing for things that they feel good about and so having some musicians come and perform and kind of get them out of their area and in a different mental mind frame even for a moment is a really nice thing," Nathan Beckett said, a resident physician with MU Health Care.

Beckett described the girls performance as uplifting and beautiful.

"I can't think of another performance quite like this," he said.

Throughout the tour, the girls also created a gofundme page to raise money for the Children's Miracle Network. And created an Instagram account @wishfulsingingtour to chronicle their journey.

After their tour came to a close, Page headed to NYU to study music business and Keithahn started her senior year at Rock Bridge. Keithahn isn't sure what she wants to do in the future, but she's thinking about working in pediatric medicine.