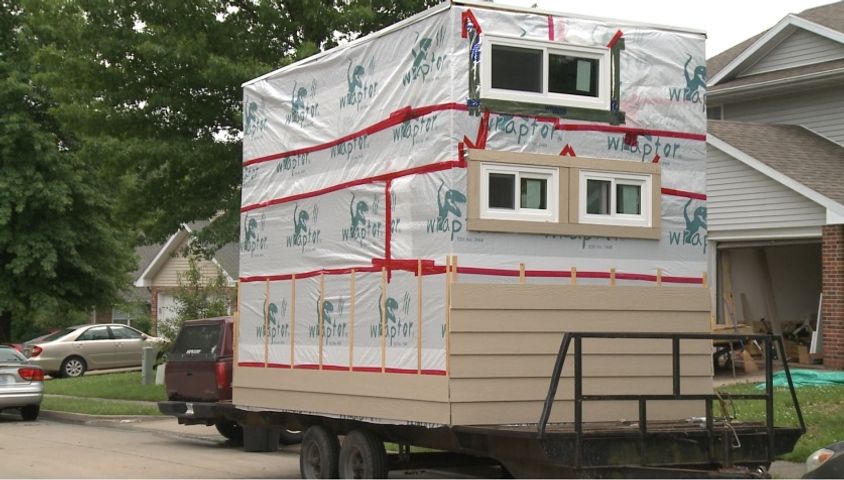 COLUMBIA - Steven Craze is 24-years-old and, like many of the more than 35,000 University of Missouri students living in Columbia, coughed up several  hundred dollars each month to live in housing near campus. In January 2014, Craze picked up a pencil and instead of writing another rent check, he began to design himself a new life.

"I don't feel getting ripped off paying rent month after month without anything to show for it," he said.

He is now building a structure known as a "tiny house."

Craze lived with a roommate in a two-bedroom house in southern Columbia and paid $800 each month for rent. His new tiny house was custom built for around $15,000.

"I can save some money in the long run even if the up front cost is a little higher and hopefully be able to live a less stressful life."

Craze is joining what some call the social movement of tiny living. People across the country are trading in rents and mortgages for tiny spaces built to hold just the essentials. The Tiny House movement coalesces financial, environmental and mental well-being into a small home designed for only the necessities.

His new home stands at 8' by 14'. A very small kitchen will sit to the left of the doorway, while a bathroom on the back right will hold a compostable toilet and a shower with water collected from rainwater.

Craze is putting his bed in a loft and designing more minimalistic counter space.

For nearly a year, Craze has built his home on a trailer in order to bypass a Columbia city code that mandates residential homes be built with a minimum of 600 square feet living space. His tiny house encompasses about 160-square-feet with the lofted sleeping area.

Columbia city leaders are in the process, however, of revising the city code to diversify the housing stock within the city.

Steve MacIntyre, with the Columbia's Planning and Development Department, said Columbia residents curious about smaller housing have reached out to the department consistently over the last few years, but that specific efforts have not been enacted until now.

"We are interested in supporting the idea," he said.

The tiny house model could potentially provide an alternative to adding density to the downtown and central city neighborhoods. MacIntyre said the change could help preserve the aesthetics and personality of the residential areas surrounding downtown.

MacIntyre said the Unified Development Ordinance (UDO), the development code that will replace the subdivision and zoning regulations once approved by city council late this year, does not include a minimum square footage requirement as the current code does.

"Most people probably aren't aware of it because they're not looking to construct a tiny house in a residential subdivision or neighborhood," he said.

R-1 districts, the subdivisions that adhere to single-family dwelling requirements, currently prevent anyone from constructing a house that's less than 650 square feet. That code, however, does not include trailers or mobile homes, which allows Craze to build as long as the house stays on the trailer.

The planned change in code would be different from the accessory dwelling units (ADU) changes made in 2014.

"The new regulations would likely eliminate the housing size requirements, but we don't know yet because it's still in draft form," MacIntyre said.

City planners are scheduled to present the changes in the upcoming months.

Craze couldn't rank the reasons why he chose to take on a project like this, but for him, it comes down to three things: sustainable consciousness, financial independence and having a space free of clutter.

He said it was the clothes that were easiest to get rid of; however, a homemade coffee table from an MU architecture class, a guitar and a few favorite books must have a home in his new house. It's also critical to him his cat, Crookshanks, feels at home in the cozy quarters.

Craze described the project as his version of the American dream: To have the essentials, a safe and sturdy home and a clear mind.

The University of Missouri junior has a background in architecture and civil engineering, but credits a lot of his success building so far to tutorials he's found on the Internet.

"A lot of this stuff I learned from YouTube videos or do-it-yourself websites," he said. "I have a little design experience, but I think anyone can do this if they take the time."

Craze said the biggest issue is he doesn't know where he'll be in five or ten years.

"If I graduate and get a job outside of Missouri then I'll be able to move my house and everything with it. That is something that I am satisfied with," he said.

Craze said, while he's aware some people might not buy into his lifestyle, he's perfectly comfortable going against the norm.

"I'm going to be the weird brother living in the tiny house, but that's kind of how I am, maybe not going so against the grain, but I just like doing things a little differently. That's how I've always been."