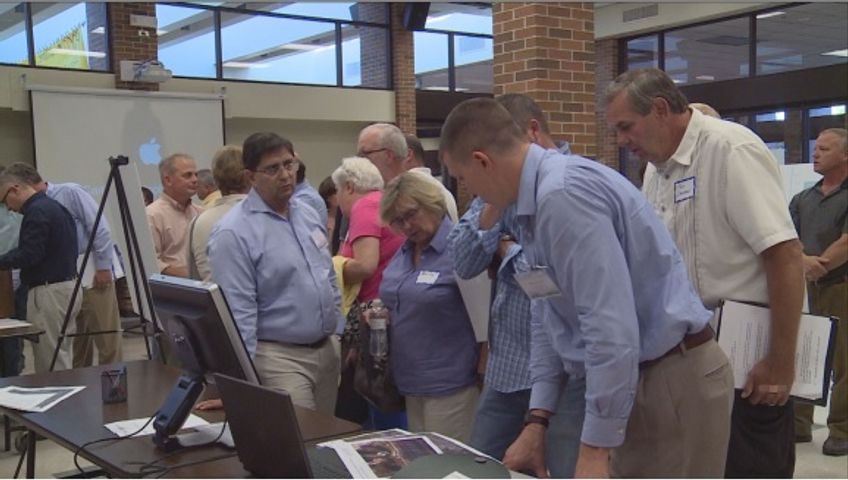 The open house allowed one-on-one discussions with project experts to ask questions and speak their concerns about pole placement and pole structure designs.

A lot of resentment for the project has come from parents of children who attend Mill Creek Elementary School. City council approved a route that would allow a transmission line across the street from the school's playground. Some parents believe this presents a health risk for children being too close to the line.

Melinda Jenne is one Mill Creek Elementary parent who does not agree with the location for the proposed power lines.

"We're all very concerned because they are running through densely populated neighborhoods, they're running past several of our schools, there's a retirement center that's going up that they're going to go over," Jenne said. "There are studies. The World Health Organization has put out information that these could be a potential risk to the community especially our children and elderly with the increase risk in childhood leukemia and brain tumors. All of these things that scares the heck out of you as a parent."

Brian Kaicher is another Mill Creek Elementary parent and believes the city has mishandled this situation.

"A lot of the research that's being presented here tonight is old research. The fliers we have been given are from 2002. There's much more recent research that contradicts what this is saying."

Those fliers compared the lines' electric and magnetic forces to having your cell phone in your pocket.

"After about two decades of research with transmission lines, high-voltage transmission lines, there has been no conclusive evidence that it causes any health problems," said Columbia Water and Light spokeswoman Connie Kacprowicz. "Any time you have electricity, you're going to have an electro and magnetic field."

Kacprowicz said the most important thing that citizens of Columbia can do is to learn more about the project.

"That's why we're here and want to get comments back so we can make any changes that are necessary," Kacprowicz said.

Since 2010, Columbia has been searching for places to put various power and transmission lines in order to meet federal regulations. The end result has been placing a new 161-kilovolt transmission line running in the southern area of Columbia along Scott Boulevard, W. Vawter School Road, Nifong Boulevard and Grindstone Parkway.

Throughout the process of placing these lines, parents have suggested putting them below ground, but city officials believe that presents a higher risk of injury than having them above ground.

If Columbia Water and Light does not meet federal electric reliability guidelines, fines of up to $1 million a day can be imposed for each violation. ¬ These substation and transmission upgrades should meet Columbia's needs for at least 20 years, if not longer.

The anticipated date for completion is 2017.

Columbia Water and Light will take comments and concerns from the community for the next 15 days before solidifying a decision.

The City of Columbia has a phone line available to The Columbia Electric Transmission Line Project at (844) 244-7870.