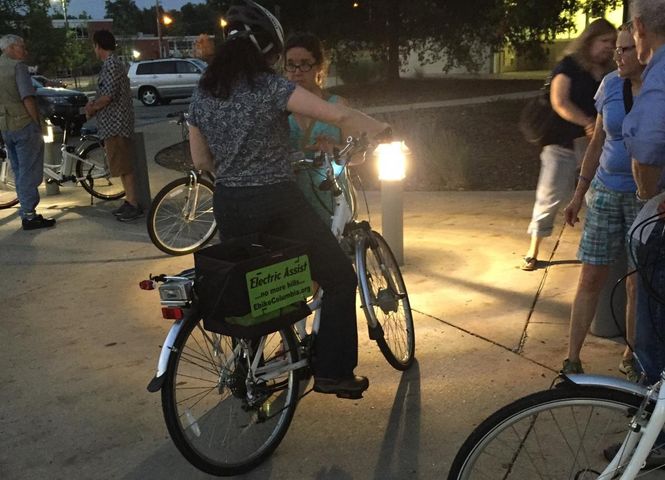 COLUMBIA - There's now a new way to get around Columbia.

GetAbout Columbia introduced electric bicycles to the public Monday night at the Activity and Recreation Center.

People got to see certain models of e-bikes at the event, and ask Bike and Pedestrian Coordinator Ted Curtis questions in regards to the new models.

Curtis said the new bicycles are very similar to regular bicycles but will give customers the opportunity to use a battery driven motor for ease of peddling. The motor is optional and customers will have the choice of fully operating the bikes manually. Some bikes will offer a throttle like a motorcycle, which will give riders the option of riding without pedaling, but drains the battery. Curtis said the rider will get about 20-30 minutes of riding on a full charge.

"They're definitely a valuable tool to have for the elderly or for people who find distance to be a barrier," said GetAbout Columbia Outreach Coordinator Janet Godon.

E-bikes have been a big success overseas in Europe and Asia and are not to exceed 20 mph.

Curtis also said the goal of the E-bikes are to get people out of their cars and to provide residents with a much more efficient way to travel.

"This is part of the mix. You see, this is one part of the mix to get people out of cars once in a while, run a little errand, maybe even ride to a park or something, as opposed to driving to a park. I mean, that counts as a non-motorized driving method," Curtis said.

E-bikes are available now and sold in local stores around Columbia. The bikes can be found at stores like Cyclextreme Bicycle Warehouse, Jim's Bike and Key and Walts Bicycle Fitness & Wilderness Co.