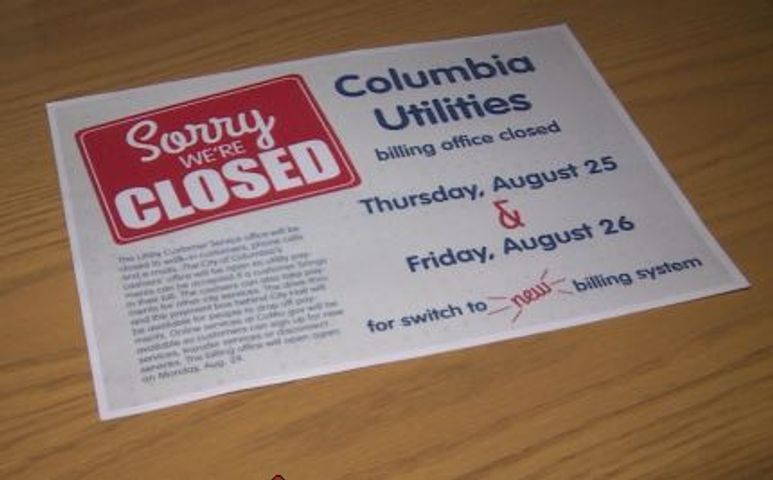 COLUMBIA - The Columbia Utilities billing office will be closed Thursday and Friday for updates to its billing system. Transitioning to the new software means customers will not be able to walk in for service, call or email while the new system is put in place, according to the Water and Light website.

Customers wanting to sign up for new services, transfer or disconnect service will still be able to do so at the city's website. Current Water and Light customers can bring in their bills to the City of Columbia’s cashiers’ office during the outage, as well use the drive-thru and payment box behind City Hall.

“This new billing system will give us a lot more ability to show the customer exactly what they’re being charged for," Kacprowitz said. “Right now, we just have a one-page bill and this will move to a two-page bill and have very detailed information.”

One Columbia resident, who recently moved from Ashland, said the upgrade will help him see exactly how much his utility rates have changed after moving to a bigger city with higher rates.

“Instead of just having one big bill and here’s what your bill is, you get to see versus day, night, winter, summer,” he said. “You know exactly where your energy output is.”

Although shutting down the systems to upgrade is an inconvenience, Kacprowitz said, it’s necessary to make beneficial improvements for customers to be more energy efficient and notice when problems arise.

“It also can be used for things like detecting water leaks,” Kacprowitz said. “If you see a big spike in your usage, it could be you a toilet that’s running all the time or leaking, and it can show you the impact, how fast it can use up a lot of water.”

Advanced Utilities is behind the upgrade and the cost is $1.3 million. Kacprowitz said funding for the upgrade came from the rates charged for all utilities.

Payments by phone and through the City’s website will be available again starting Monday at 8 a.m.