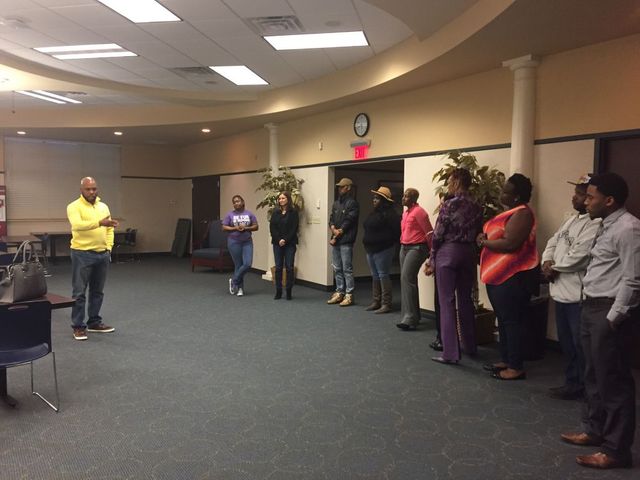 COLUMBIA — When Deronne Wilson arrived at the First State Community Bank, he was expecting a job evaluation. Instead, friends and co-workers surprised Wilson with the “Hero Award” for 18 years of service to the Columbia Boys and Girls Club.

Wilson works as both the director for the club and the assistant coach for the Tolton Boys Basketball Team.

After a tough loss to Southern Boone in the district semifinals last night, Wilson was hoping for a raise at today’s evaluation.

The surprise award ceremony caught him off-guard and brought him to tears in front of a small sample of those he has impacted through his career.

A small group of friends, volunteers and people impacted by Wilson took turns telling Wilson how much of an impact he has had on their lives and praising his dedication to the community.

“This was an opportunity to show thanks for all the great things he’s done and continues to do on a daily basis. This guy is changing lives in the community, literally. I don’t know if there’s anything better you can do than to impact lives in a positive way,” said friend and fellow coach Jeremy Osborne.

The messages from his friends quickly brought Wilson to tears.

“I started working with youth because I wanted to be a better father, because I grew up without a father. I wake up every morning knowing that I’m going to a place where I can do good, impact others and be a positive influence because some of them don’t have a father figure,” Wilson said.

Wilson added the best is yet to come for the Boys and Girls Club of Columbia.

“What we’re about to do with the club over the next 12 months, the community is in for a big surprise. We’re getting ready to do something special,” Wilson said.