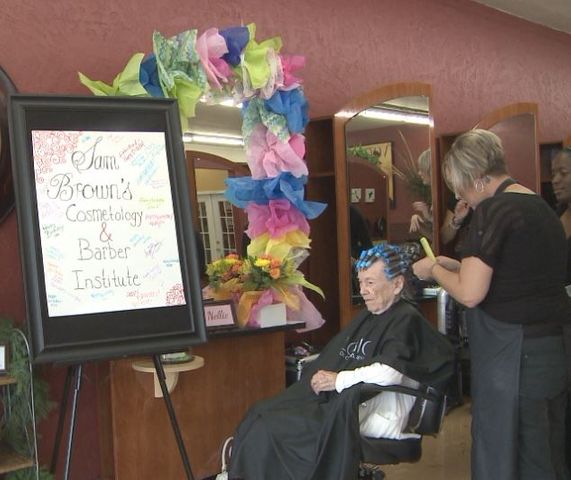 COLUMBIA- A Columbia woman accomplished a big life milestone when Nellie Again celebrated her 99th birthday on Saturday. Again enjoyed her birthday by going to Sam Brown's Cosmetology and Barber Institute, the hair salon where she has been getting her hair cut for the past 10 years. She was greeted with flowers, cake and an extra large birthday card signed by all the staff.

Joyce Turner, a close friend of Again helped organize her birthday welcome at the hair salon. Again and Turner have remained close friends after meeting in 1995 when volunteering at the Ellis Fischel Cancer Center. The two volunteered by joining the Ellis Fischel Auxiliary and worked to help raise donations for the cancer center. They furthered their involvement in the community by working with their church groups to knit and sew blankets for the cancer patients.

"It has been such an honor to be her friend and I wanted to make sure she was celebrated today," Said Turner when asked about her friendship with Again.

Despite being 99, Nellie Again continues to be successful with independent living. Again said she lives by herself and enjoys that she is still able to drive herself around. Again went on to be grateful for her children's continued support of her independent living style.

"My family helps me a lot. I have a daughter and two sons. One lives in Hawaii, the other lives here and helps me with my yard work and so forth." Said Again.

At the conclusion of Again's haircut she said she was excited to look extra nice for her birthday and that she was looking forward to spending quality time with friends and family at a picnic scheduled for later in the afternoon.