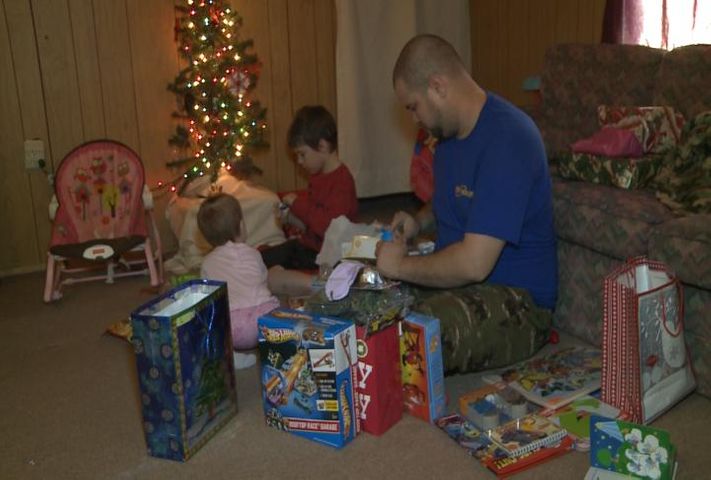 COLUMBIA - Until Sylvia Bales Sprinkle, from Columbia, and her small army of volunteers showed up on their doorstep Thursday morning, the Colborns were expecting a humble Christmas for their kids this year.

Sprinkle said people in the community told her the Colborn family might not be able to afford a real Christmas, so she wanted to make sure they do have one.

"The relief when you hand the kids presents and they don't have to worry about that in the morning, that's worth it."

Sprinkle surprised the Columbia family with Christmas gifts as they were just waking up on Christmas morning. She and her team delivered about a dozen wrapped gifts, bringing joy and smiles to the holiday season needy.

Sprinkle collected the goods through her Columbia Pay it Forward page on Facebook, an initiative she launched a month ago to collect and distribute donations and presents for children in mid-Missouri. In just a few weeks, the page got more than 500 members and eight similar pages sprang up for other counties in mid-Missouri.

"People have been wonderful for all the families. We have some very heartwarming people here in Columbia, Ashland, Hartsburg and Boonville," Sprinkle said.

The Colborns have four children, but only the two youngest were home for Christmas.

The father, Jason Michael Colborn, said he was not expecting this attention for the holidays.

His children wrote letters to Santa but they wanted more high-tech presents rather than toys.

"Tablets, iPhones, I forgot what else did they have on there, because the other ones are older," said Colborn.

The family was one of 79 who received donations and gifts for children, said Sprinkle. She said she plans to visit more families during the holidays.

Taylor Gibson was one of the volunteers helping Sprinkle deliver the surprise. She is also in charge for the Boonville Pay it Forward page.

To make a donation, visit Columbia Pay it Forward on Facebook.