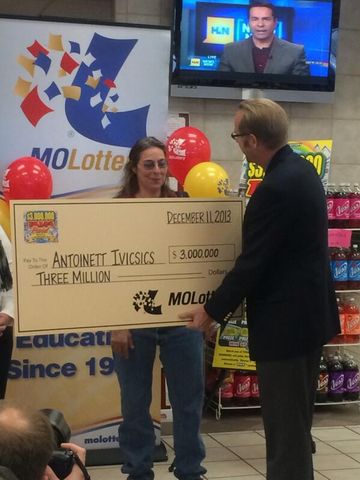 She remembers the moment she became an instant millionaire at Petro Mart, 3850 N. Rangeline Street in Columbia, on Dec. 2. She stopped at the station at 1:00 a.m. on her way to work the 4:00 a.m. shift.

"I scratched the card, looked down, and I thought it was $3,000," Ivicsics said. "Then I brushed off the scratchings and saw the other zeros." She said she feels blessed and "still can't believe this happened."

Ivicsics often checks the Lottery's website, MOLottery.com, to assess how many top prizes have been claimed in Scratchers games, and she chooses which games to play based on the remaining prizes.

"I was excited that it was a regular customer," said Denise Kromschroeder, District Manager of Petro Mart.  "She's been coming in here for a long time and she's a faithful lottery player for sure."

She has not decided what she will do with the winnings yet. Ivicsics has no interest in playing Mega Millions games.

Ivicsics has been working at the Women's and Children's Hospital in Columbia for nine years. She loves her job and plans to keep working.