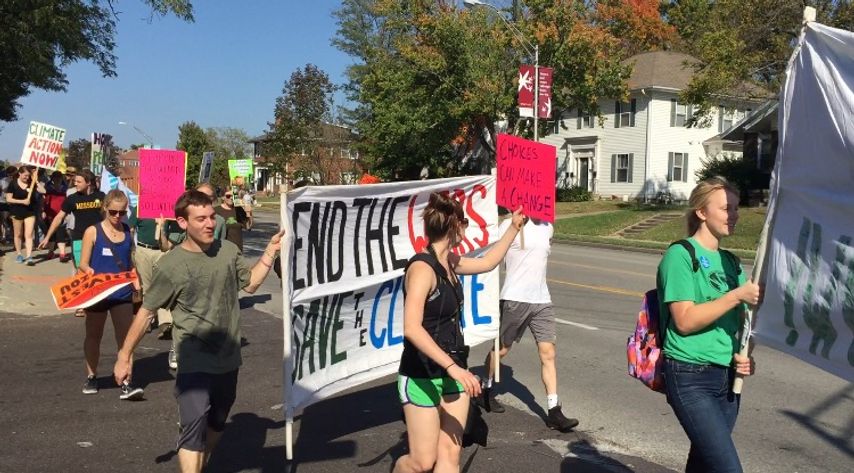 COLUMBIA — Columbia activist groups and residents all banded together to "Walk for the Climate" Sunday morning.

People of all ages were apart of the walk, holding banners and signs with "Climate Action Now!" and "Honk for Peace and Earth" as they walked through downtown Columbia and the University of Missouri's campus.

The groups aimed to bring awareness to it just three weeks before the general election in the U.S. and in Missouri. The purpose of the event was a call to action for lawmakers at the local, state and national levels to make their positions on climate change clear to the public.

The Missouri Chapter of the Sierra Club spoke to the group and announced who they are endorsing in this upcoming election. To see a list of their endorsements, click here.

Mark Haim is the Director of mid-Missouri Peaceworks and helped spearhead the effort to have the walk take place. Haim believes climate action needs to be taken now.

"We are facing a climate crisis and there is too much denial and too little attention, Haim said. "Particularly in this political season as candidates run for office, we've seen that they are not focusing on the climate crisis and it's an urgent matter."

Haim said the 5k walk that they are participating in is a good way to bring awareness to the issue.

"All of our actions matter. We need to make our voices heard. It's time to be vocal and visible and holding candidates accountable for their positions now before the election," Haim said.

Also in attendance for the walk was several Mizzou students who believed being part of the younger generation is an important reason to be involved in the effort to raise awareness on the issue. Sean Donovan was one of those students.

"It's really fighting for my future and the future of all people in my generation. Climate change is something that is clearly occurring and is going to be happening increasing dramatic implications for the world," Donovan said. "It's going to have a huge effect on me."