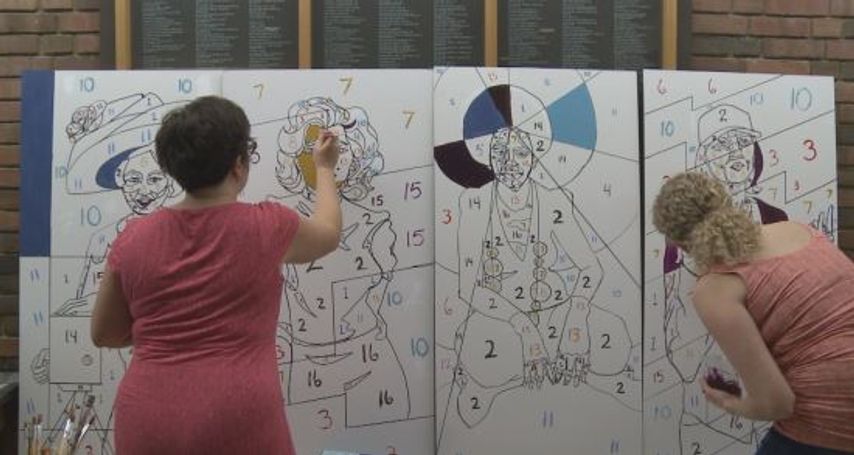 COLUMBIA - The Citizen Jane Film festival is reviving paint by number in a new way.

For the first time, the group is displaying a collaborate art piece at the festival, enlisting help from the community. Members of the public are invited to paint part of the art while they purchase tickets at the box office.

Executive Director of the Citizen Jane Film Festive, Barbie Banks, said the idea was to make movie go-ers interact more with the festival.

"Any time we can bring people in to have an experience that's gonna change them and get them immersed in it, it's just better. So we do that with the films, but why not do it as they're walking around the festival? Everything that they're doing somehow connects back to the art thats happening," Banks said.

"I just thought bringing the community together around an art piece that's then gonna be around forever seems like a really good idea," Banks said.

"This is an opportunity for people who have zero artistic interest or skill to interact with a piece that will eventually be displayed. You can walk past it and be like 'I painted that one purple square and so that's partly mine," Director of Resident Arts Madeleine LeMieux said. "There's like ownership over it and I think this idea of owning a piece of art that lots and lots of people participated in generates excitement about the art and the process of making it."

Citizen Jane's mission is to change opportunities for women in film through the festival. According to the film festival's website, women direct only two percent of the top 700 films in the U.S. in the last two years. Barker hopes the art will be a creative channel to remind women of their opportunities in the art world.

"As women, if there are women painting on it, letting them know that there is a space for them as an artist. While we are a film festival, we're also a place that wants to showcase any sort of art that's happening made by women," Banks said.

The art piece will be displaced throughout the weekend and then in future Citizen Jane Festivals.