Community, businesses send former firefighter on trip of a lifetime 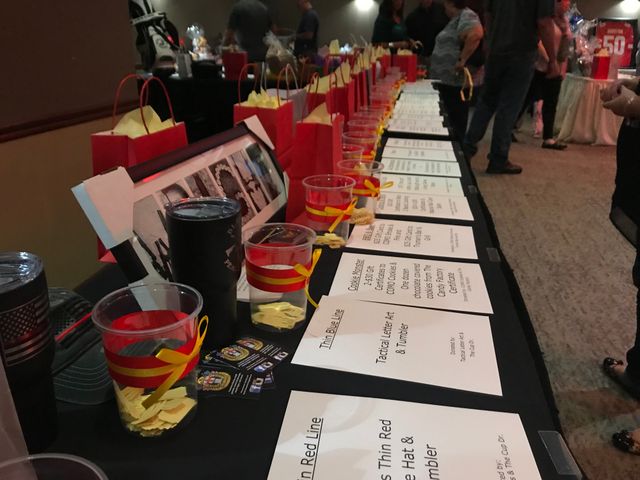 COLUMBIA – The city of Columbia has come together to make the dream of one man come true. After two months, businesses and individuals have raised more than enough money to send a recently retired firefighter to New York City.

Marc Wright was hired by the Columbia Fire Department in 1992 at the age of 21. He served at a number of different fire stations throughout the years, until he became division chief in 2012.

“When I was six years old, that’s when I knew that I wanted to be a firefighter like a lot of young girls and boys at that age,” Wright said.

Over the past twenty-five years, Wright has left a memorable impression on his coworkers and community.

“Marc holds a special spot in a lot of guys hearts around here,” Firefighter Tommy Goran said. “He’s the kind of guy you follow into a fire with no questions. If I am half the man he is, I’d be happy about that.”

“I was diagnosed with colon cancer,” Wright said. “I went through six months of chemo at that time, twelve rounds, and had a surgery that lasted 6-7 hours.”

But that was only the beginning. Six months later, Wright found out the cancer had moved to two different spots in his liver. He had to have surgery that lasted seventeen hours.

The cancer didn’t stop there. Wright is currently battling lung, lymph node and liver cancer. Over the past three years, Wright has undergone thirty-one rounds of chemotherapy, 7 weeks of radiation and two surgeries.

“A lot of people hope to beat cancer once, and he’s beat it three times,” Goran said. “He’s just such an inspiration to everybody through all of this, never gets discouraged, keeps God at the forefront of his life and just leads a life that most of us would hope to live.”

Wright was a part of Missouri Task Force 1 when the September 11 attacks happened, and ever since it has been a dream of his to go and visit New York City and the 9/11 memorial.

“It’s just a very important place, especially for us in the fire service to pay tribute to all the police and EMS workers and firefighters that lost their lives that day,” Wright said.

Goran and Strawn created the benefit to help raise money to be able to make Wright’s dream a reality.

The idea came about when Goran was sitting with Wright at one of his treatments a few months ago.

“We were just randomly talking about all the things he hadn’t done and still wanted to do, because he’s recently retired in the last six months, and one of them was go to New York City,” Goran said. “Obviously he’s got a lot of money going out towards treatments so this is something we wanted to fund for him so he could do it.”

Goran planned a fundraiser and auction to raise money for Wright’s trip, and it was a huge success.

More than 160 businesses in Columbia got involved in the fundraiser by donating items, money and services to the auction. Veterans United, Bass Pro, relators and a number of doctors in the community donated services or goods to the fundraiser.

After two months of gathering items, Goran and Strawn held an auction on Oct. 19 at Columbia’s Peachtree Catering and Banquet Center.

Family, friends and local firefighters came to support Wright as he was presented with more than $15,000.

Goran said with Marc’s legacy it wasn’t hard to collect the money. “When you do an entire life’s work of service, you affect a lot of people,” he said.

Among the attendees, was a man who Wright cut out of a car when he was five years old. His lung had collapsed during an accident and Wright saved his life.

When Wright first heard about the benefit, he wanted to tell Goran no. But he found a way to make the benefit impact more than just him.

Wright has decided to donate the money made on top of the cost of the trip to two local organizations: Fire Fighter Cancer Support Network and the Safety Net of Missouri.

The Safety Net of Missouri is an organization that helps take care of families who have lost a loved one while working as a firefighter.

The Fire Fighter Cancer Support Network is a nonprofit organization that helps offer care and assistance to fire fighters who have been diagnosed with cancer.

Strawn, who is the State Director of the Fire Fighter Cancer Support Network, said firefighters are much more likely than others to be diagnosed with cancer.

According to Goran, that is what the Marc Wright Cancer Benefit was all about: raising awareness and education about cancer in fire departments.

Wright said he was overwhelmed with the amount of money raised and the number of people and businesses that got involved.

“I was fortunate enough to work in a job where we could take care of people and to help people on a daily basis, and for me to be on the other side of that, it’s a weird feeling but I am very thankful,” Wright said. “We’re just one big family here in Columbia.”

Wright plans to take his trip to New York City during the first week of November. He will travel alone so he can spend as much time as possible at the 9/11 memorial.