Community Dashboard mapping out all the city's projects 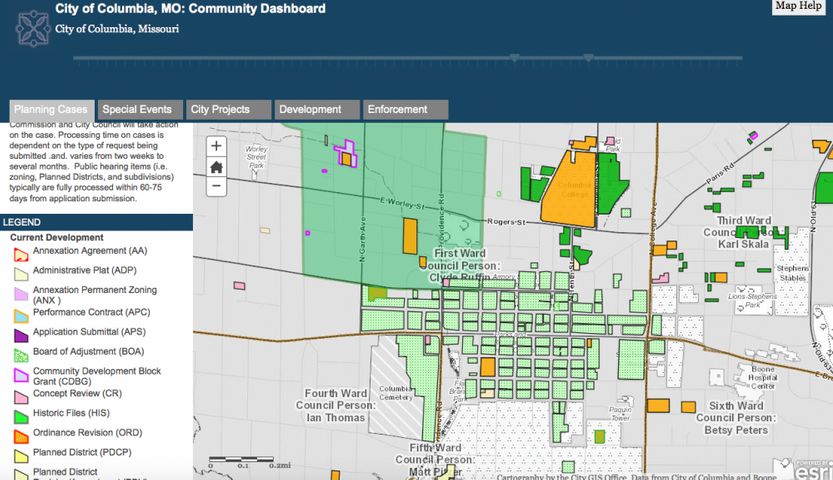 COLUMBIA - Residents can now track the progress of past, present and future infrastructure projects going on in Columbia.

The Community Dashboard website is a convenient way to keep up with the growing number of projects going on in the city.

"Taxpayers can check the progress of projects in their neighborhood, on their commute to work, and in the community to make certain the City is completing projects promised at the ballot box,” said Mayor Brian Treece in a press release from the city.

All city departments contribute data to the site on all the projects happening in their respective departments.

“We started off with planning cases, special events we added permits and then we’ve added in the capital projects, code enforcements was the last one,” said Gerike.

All of the maps are then updated as information comes in.

“If something happens today in our systems we update the map overnight so that information will be refreshed for the next morning,” said Gerike.

Right now there are 143 projects going on, and 102 planned to happen in the next few years, and with this tool all the information is in one place.

“For citizens and even for city staff it makes it a lot easier to find good information and the right information,” said Gerike.

The Community Dashboard is a tool for both citizens and city staffers to guide and answer questions as they arise.

“There is a lot of information there that sometimes we don’t think about that as being interesting information or information about what’s going on in the city, or how the city is changing, but for example if you look at the building permit map zoom out to the city overall and use the time slider to see where the pattern of growth has been, you know it’s not just a story about building permits it’s really a story about how the city overall is changing,” said Gerike.

To explore the site users can go to http://www.como.gov/Maps/Dashboard/.