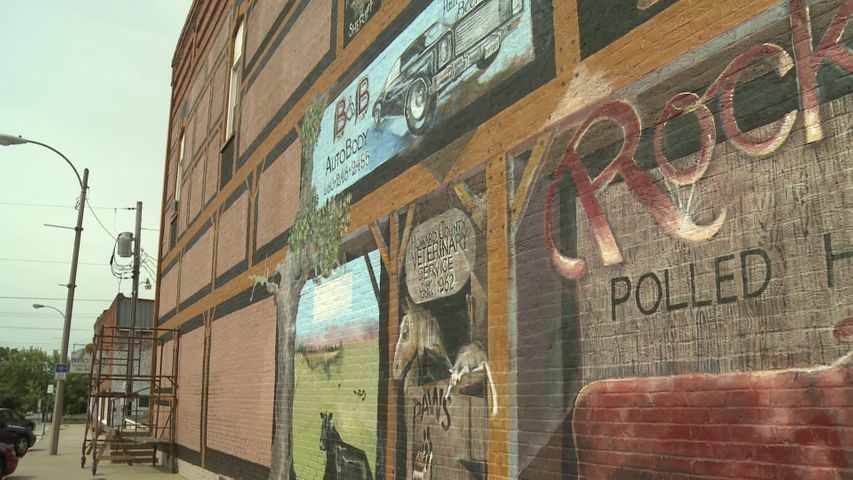 FAYETTE - With nearly two months of work already completed and a community united behind her, muralist Peggy Guest continued Thursday to fight MoDOT's request for her to stop painting. The panels of advertising art violate MoDOT's regulations about advertising near a state right of way.

Missouri law regulates outdoor advertising located alongside highways like 240, or Fayette's Church Street. MoDOT considers the handpainted work too large and too close to sit as an advertisement along the highway.

But Guest and other Fayette residents are trying to find a way around MoDOT's objections with a new city ordinance designed to deem the work  "an official sign of the City of Fayette," making it exempt from MoDOT's regulatory statutes. The ordinance passed at a special meeting Tuesday night. Alderman Wally Eaton said the mural played a larger role in the promotion of downtown business. "To me," he said, "I think this is a great way for people that come into the community, that might want to start a business or not, to be able to look at Peggy's wall and see actually what Fayette as a small community does have to offer."

Guest also believes that a more physically attractive downtown can help business. "All it takes is paint," she said. "It's the fastest, most economical and most dynamic way to change the look of something. If we can't do that, I don't know what we can do."

A number of residents, city aldermen and the mayor pro-tem have jumped on board to support the mural and the ordinance, with attorneys preparing to send the new information to MoDOT early next week. Guest said businesses have continued to voice their support for the project and hope to fill more spots on the wall.