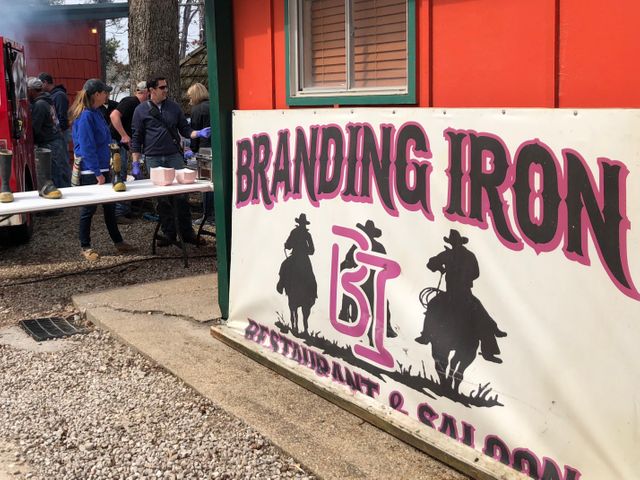 SUNRISE BEACH - The smell of fresh barbecue filled the air at the Bear Bottom Resort this afternoon. The community gathered to raise funds for The Branding Iron Restaurant’s owners after it was lost in a fire last weekend.

“I’m just overwhelmed. This isn’t even the start of it,” Kelly Preator, the owner said, “Even my cooks are up with the firemen cooking the burgers, and just to look around and see all the people that I love and appreciate. And they’re here for us.”

Kelly and Laurie Preator have lived in the Sunrise Beach area for 15 years and operated The Branding Iron Restaurant for eight. On the morning of March 16, they learned the restaurant that was such an important staple in the community for years was destroyed by a fire.

The Preators are well-known for giving back to the community. Every year, they serve a free Thanksgiving dinner, host a Christmas fundraiser and provide continuous support to the area’s first responders.

“It’s a major thing for [us] to have Kelly and Laurie in our community so we just want to pay back a little bit and that’s what this is about,” Dill said. “The firemen have come together, the community has come together, and we’re just here to give to them this time.”

Dill said what started as a parking lot get-together quickly turned into a demonstration of overwhelming support from the community. The morning after he created the event page on Facebook, there were over 1,000 people interested in attending.

Local firemen, Branding Iron employees, and community volunteers served food to attendees from noon to 4 p.m. Silent and live auctions also took place with items donated by local businesses and people. Dill said before the event began this morning they were expecting between 600 and 900 people to attend.

“[The Preators] are the kind of people I want to be my neighbors,” Dill said. “When they’ve given so much, this is just a little part that I can do to say, ‘Hey, thank you,’ and that’s why I’m here.”