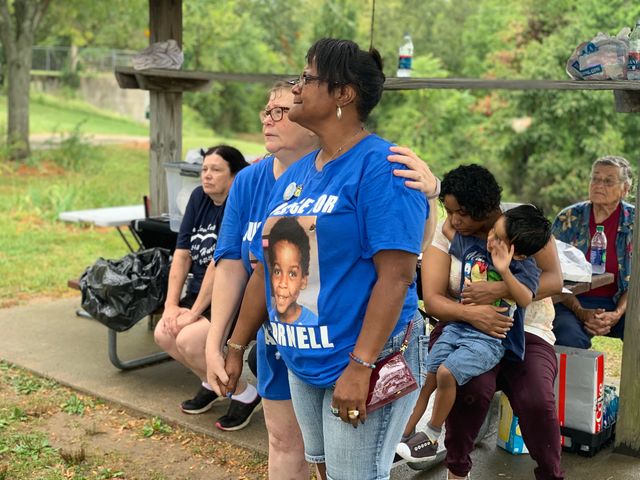 JEFFERSON CITY — Rain didn't stop family, friends and members of the Central Missouri chapter of Parents of Murdered Children and the Columbia chapter of Missouri Missing from remembering their loved ones Saturday.

The organizations came together at McKay Park in Jefferson City for a potluck picnic in honor of National Day of Remembrance for Murder Victims, which is actually held on Sept. 25 each year.

People told stories about their lost loved ones, offered support to one another and shared advice for how to process their grief.

"You need to find someone you can share it with. You need to survive this," said Nancy Whitmarsh, the Central Missouri chapter leader of Parents of Murdered Children. "That's the major thing: survival."

Mary Williams-Coley, a member of Missouri Missing, represented 4-year-old Darnell Gray at the event. Gray was found dead in October 2018. His caregiver, Quantavia Givens, is charged with neglect or abuse that resulted in his death. Williams-Coley said she represents Gray at all types of events now, including court hearings.

"He can't speak for himself," Williams Coley said. "We're here so that we can get justice for him."

Marianne Asher-Chapman, the executive director and co-founder of Missouri Missing, lost her daughter Angie in 2003. Her husband admitted to killing her and served four years in prison, but Angie's body was never recovered.

Asher-Chapman and others held back tears as she shared a poem Angie wrote her in the 1990s before she went missing. "Even through loneliness and fear you were here in my mind, soul and heart," the poem read in part. "Like a God from above, you have given me my first vision of love."

The organizations host events throughout the year. The local chapter of Parents of Murdered Children hosts a support group meeting on the second Friday of every month at 7:30 p.m. in the Boone Electric Community Room on Rangeline Street in Columbia. For more information on Missouri Missing, visit its website.