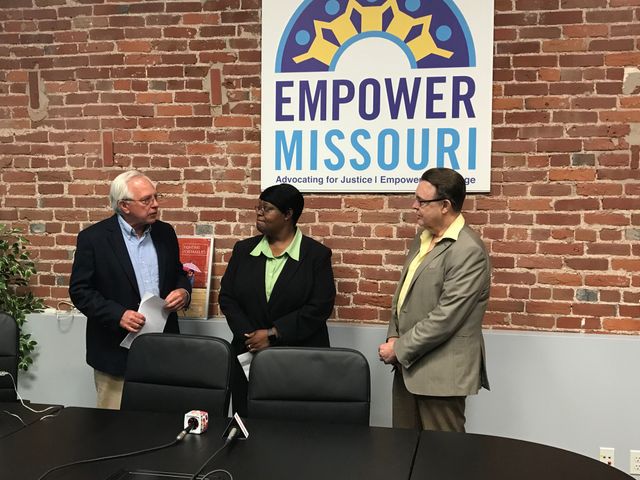 Members of Empower Missouri, Missouri Faith Voices, the NAACP, and the Human Rights Task Force allowed the media to listen in as they talked about the results in the state-wide 2017 Vehicle Stops Report.

Attorney General, Josh Hawley, released the full report on Friday. According to the report, in Missouri, blacks were stopped 85% more than whites.

Nimrod Chapel, president of the Missouri NAACP chapter, emphasized the problem this report outlines. He referenced the national NAACP travel advisory issued in August 2017 for the state of Missouri, and said it is still in effect.

"We're sharing the fact that we have to be a beacon, warning people that if you come through the state of Missouri, or worse live here, and you're a person of color that you could be treated differently," he said.

Chapel feels the report shows a lack of responsibility in law enforcement officials.

"Each citizen deserves to be treated equally and fairly, the Vehicle Stops Report indicate that that is not the case," Chapel said.

Don Love, Human rights task force co-chair, looks at data from various law enforcement agencies. He says one of the main things his department analyzes is the disproportion in consent to searches.

"When you look and see that an agency ends up being suspicious of black people at a rate two times, three times, or four times higher than white people, then why is that?," he said.

Love said those agencies may have an explanation for wanting to search vehicles.

"Maybe officers have concrete facts about individual that there actually acting on, but if that's so, we need to hear an explanation from the agency on what those facts are." Love said.

"We all want to be protected but what we don't want to see is over-heavy stops in certain areas or people being targeted," she said.

She feels that law enforcement and the community need to come together to help solve this issue.

"Our whole City of Jefferson needs to be protected and secure and policed. And policing should be a partnership with our city when we pay our tax dollars," Johnson said.

Love said now that the data has been compiled, agencies will be asked to respond to the reports in a public forum. And community members can provide their feedback.

He said the attorney general will also encourage agencies to improve the racial disparities in policing.

"The attorney general has given responsibility for making sure that agencies get their disproportion's down," he said.

Love also said there is a coalition working to rewrite the 2000 Racial Profiling Law. He said this law mandates the Vehicle Stop Report.