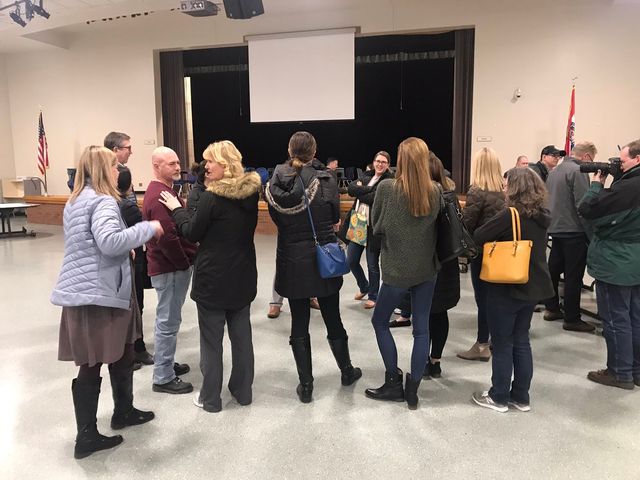 COLUMBIA – Parents and members of the community expressed their concerns at an open house at Gentry Elementary on Wednesday for the proposed changes to school attendance zones across Columbia.

Amanda Beard, a mother of two Rock Bridge students, just moved with her family to Columbia last year. She said she is frustrated that the possible attendance area change could make her children move schools again.

“We’ve moved around a lot because my husband is military,” she said. “We get here, and we say ‘Hey girls, you’re not gonna have to change schools, you’re here to stay finally,’ and not even a year later, we are telling them they are going to have to move schools again,” she said.

Beard and her family decided to sell their house in order to guarantee that her kids will stay enrolled at Rock Bridge whether or not the new attendance areas pass.

“We are selling because when we came here, and when we looked, we spent about two weeks house hunting. We did a ton of research, and Rock Bridge has very good test scores, they had a lot of programs,” she said.

Beard also said her daughters were very upset about the possibility of changing schools.

“My daughter cried for about a hour,” she said.

The district plans to put the new attendance areas in place in August 2020 when the new public middle school on Sinclair Road is completed.

Overcrowding and overcapacity classrooms were one of the main reasons the district decided to consider the change, CPS Community Relations Director Michelle Baumstark told KOMU 8 News in November.

Jennifer Roberts started the Start2Finish group made of families who want their high school age children to be grandfathered in —remaining in the same high school even after the new attendance zones are made.

As for Roberts’ daughter, she said a change in schools would be extremely difficult.

“She would be crushed. I think she would be devastated, it’s a good word, because that’s what it would be to a teenage girl,” Roberts said.

School Board members will meet to discuss the decision on February 11. The latest date for the board to make their final vote will be on March 11, according to the district website.

Community members can see the options on the district's website and are encouraged to take an online survey to express their opinions.

According to Beard, her family is not the only one who is making a move in order to not change schools.

“Basically everybody is kind of doing the same thing we are. They are already looking into selling their homes if they have to move,” she said.

The next community open houses will be held: