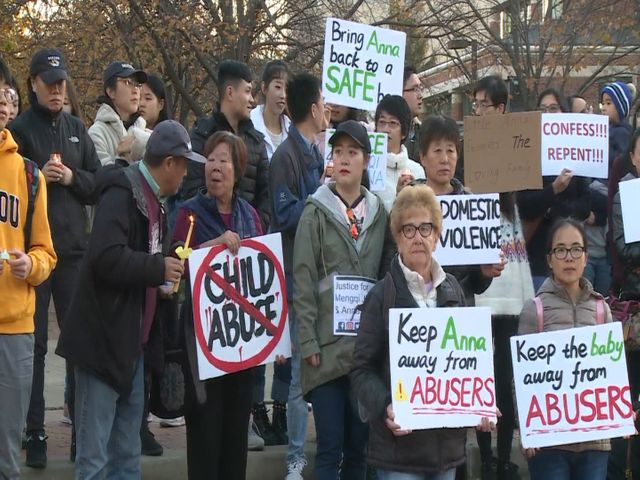 "We would not have made much progress without all of your help," Xiaolin Ji, Mengqi Ji's father, said through a translator. "I believe truth will eventually come out about what happened to Mengqi. And I believe righteous will always win over evil."

Those gathered in the circle sang Amazing Grace and prayed together for Mengqi Ji.

Friday was the one-month anniversary of Mengqi Ji's disappearance. No one has been arrested in the case, but Boone County Prosecuting Attorney Dan Knight said Wednesday in court that her husband, Joseph Elledge, is the prime suspect in his wife's disappearance.

Joseph was arrested in October on charges of child abuse. He is currently in Boone County Jail on a $500,000 bond for child abuse and neglect.

Some of the people at the vigil held signs with the words "Keep [the child] away from abusers," a reference to the custody battle between Joseph Elledge's mother, Jean Elledge, and Mengqi Ji Elledge's parents.

Knight said in the same court appearance that both sets of grandparents will have equal custody of the child.

Community members are gathering at MU’s Speaker’s Circle to call for justice for Mengqi Ji Elledge, who has now been missing for a month. @KOMUnews pic.twitter.com/VtkuNAzpYD

Mengqi’s father is now speaking to the crowd. A translator is with him to relay his message in English. @KOMUnews pic.twitter.com/geK8OolC27