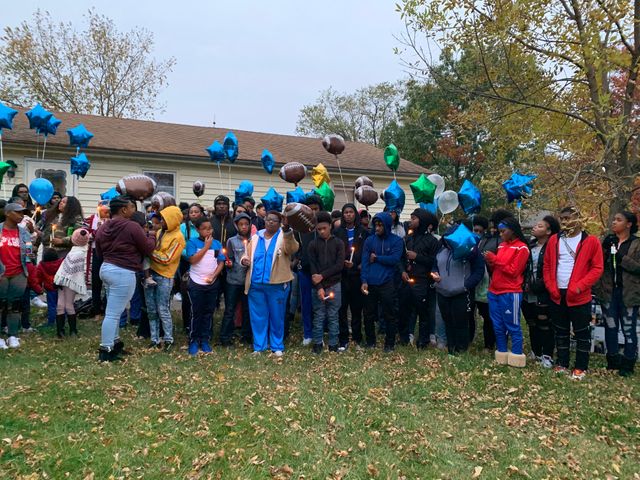 COLUMBIA – Family and community members came together to remember the life of 13-year-old Dajion A. Harris Thursday at his family’s home on Rice Road in Columbia.

Family and friends celebrated Harris’ life at a candlelight vigil held in the family's front yard. They filled the lawn with balloons, posters and lite candles.

“Nobody is taking this well at all,” Harris’ grandmother Patty Booth said. “How can you? How can you take it well? A 13-year-old child was taken for no reason at all.”

According to the probable cause statement, White told police he and the victim "were getting high" when the victim showed White two guns. Court documents quote White saying both were "playing" with guns when the victim said to shoot him.

"And I just did, like that, and the gun just shot him, and I shot him in the head and he dead," White said, according to the probable cause statement.

At the vigil, Reverend James Gray spoke to the crowd. He explained the crime and violence Columbia has experienced in the past several months has to stop.

He also passed around his hat, taking donations from the crowd to try and support Harris' family.

“This is my family,” Revered Gray said. “All of them are my family. I come out here to say we got to come together. It’s about loving one another.”

Booth said if Harris were still alive, he would have eventually become a star football player or basketball player. He was just getting started on his athletic career, which appeared very promising, she said.

“It’s a tragic loss, and we are going to miss him forever,” Booth said.

Columbia police said in a press release, officers responded to a report of a shooting just before midnight and found a victim with a serious gunshot wound on Saturday. He was taken to a trauma center and was pronounced dead at around 4 a.m. Sunday.

"Our thoughts are with the family and friends of this young man who has been taken from them and our community much too early," Columbia Police Chief Geoff Jones said in the release.