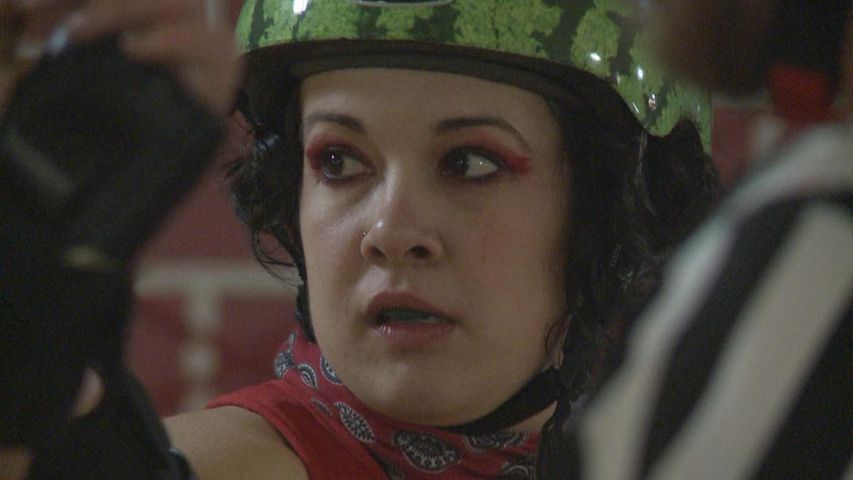 JEFFERSON CITY - It's compared to things like football and hockey, but the sport is not played with a ball. One thing for sure is the sport that started off as only for women is now the fastest growing sport in the nation. The sport is called roller derby, and Columbia's team is in its eighth season.

"At the end of last season we were lucky to have 8 or 9 people at a scrimmage practice, and the first scrimmage of this season we had 30," CoMo Derby Dames team member Sarah Wells-Morgan said.

Columbia's league, known as the CoMo Derby Dames, isn't the only one with a catchy name; team members can go by different names on the track, sometimes involving a different identity.

"My derby name is Plain White Tease," Wells-Morgan said. "It was a play on words from my college days. My sorority nickname was tease, and it kind of went off of the band, which the band is terrible but at least it's a recognizable name."

"I decided with L on Wheels because when I turned 16 and started driving, my dad was like oh my gosh you're going to be hell on wheels," CoMo Derby Dames team member Laura Pruitt said.

The sport is far from relaxing. In addition to the season, the team practices every Sunday evening, and has endurance practice on Thursdays.

"It is full contact." Wells-Morgan said. "I mean the closest thing to a women's full contact sport is rugby, and we're rugby on skates."

There are 30 women of all ages and professions on the team.

The ladies soak up everything that comes with being on a team.

"Roller derby encompasses athleticism, empowerment, fun, a chance to be yourself and do something for yourself," Pruitt said.

"It's a game that incorporates speed and agility, and strength, and you have to play offense and defense at the same time," Hawk said.

Fans provide lots of noise, but it's team members on the track who are the loudest. Communication is key when playing offense and defense at the same time.

"So much yelling," Pruitt said. "It's really loud on the track. It's, everyone's got eight wheels, everyone's rolling, the floor rumbles. I mean you can hear them out there. The only way you can get your point across is to scream at the top of your lungs. And, I usually lose my voice by the end of games. "

For many, the game is tough to follow the first time you watch it. The Women's Flat Track Derby Association lays down the law of the flat track and basic rules on its website.

The game is called a bout, which is split into two thirty minute halves. Within each half are jams, or periods of play. These jams can last as long as two minutes, but the jammer, or the point scorer, can call the jam at any time.

"There are five people from each team on the floor at a time, there are four blockers and one jammer," Wells-Morgan said. "The jammer has the star on their helmet. The jammer is the sprinter basically, and the point scorer." "If you are a blocker you're playing offense and defense because you want to help your own jammer stop the other teams, so you're constantly transitioning from offense to defense."

"You have to get your jammer through the pack, she laps the track, and when she comes back through she gets a point for every opposing blocker she passes," Hawk said.

"You have to maintain a pack, if you get too far from what the refs call the pack then you know you can get penalized for that," Pruitt said. "So, you want to try to stay with the pack so."

Final scores can soar pretty high, but a jammer doesn't score during every jam.

"When you score points you feel incredible, and when you get stuck in the pack you are so defeated," Hawk said. "It's just terrible."

"If you just have one great hit, it's just enough to keep you going," Pruitt said.

Not all hits are legal. There are quite a few illegal hits as well as illegal types of play in roller derby. Even though it's full contact, it's not a free for all on skates.

CoMo Derby Dames players said the legal hits are definitely enough to knock you off your skates and onto the anything but soft, hardwood floor.

"I usually will get peppered with little bruises up and down here from people hitting me," Hawk said. "If you don't fall down that's great."

"The falls are so worth it," Pruitt said. "I mean like I said, I will play this game until I'm crawling, you know."

The falls aren't the only thing that brings the ladies back to the track for more. It's the feeling of a community that keeps them skating back with bumps and bruises to show.

"My teammates and my friends are probably the best part because I never had girlfriends previous to derby," Wells-Morgan said. "And, now I have 30 people I can count on if I need something."

"The camaraderie, the sense of my physical self that I never had before I did this," Hawk said. "I never thought of myself as being strong or powerful, and now it's just become part of my psyche, is oh yeah I can do push ups."

Some of the players lace up their skates time and time again because they have something to prove.

"I play because I wanted to see if I could, and I've never played a sport," Wells-Morgan said. "I was a musician."

The ladies say getting on the track and giving it all you've got during a bout does the same thing as one's favorite little black dress once it's worn.

"It is empowering and sexy to go see a woman go out there and just beat the snot out of somebody, physically," Wells-Morgan said.

The CoMo Derby Dames' beat downs take place at Sk8 Zone in Jefferson City. The ladies explained they would love to play where the team is from, but there is no place fit for them to practice and play in Columbia.