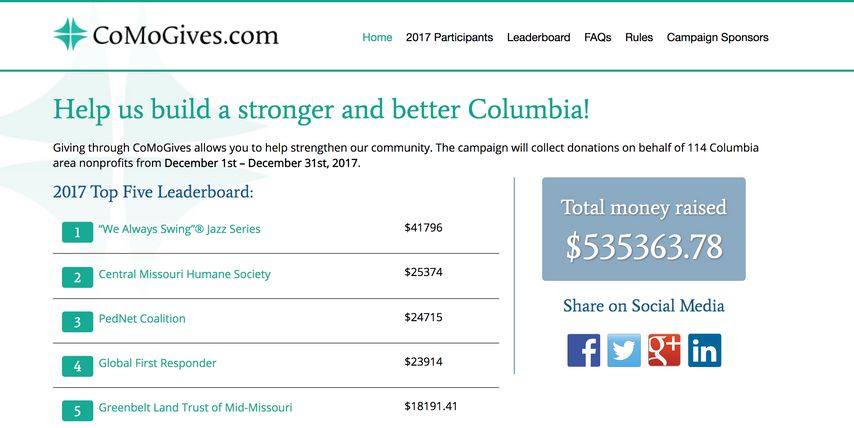 COLUMBIA- The CoMo Gives Campaign is headed into its final 72 hours on the campaign trail.

John Baker, executive director of the Community Foundation of Central Missouri, said “We’ve raised $26,000 since 6 a.m. this morning, and at the rate that gifts have come in thus far, we feel that we will reach that goal and surpass it.”

From humble beginnings in 2013 with only 30 participating non-profit organizations, the CoMO Gives campaign is rolling into 2018 with a successful fifth year. With 114 participating organizations and at least $535,000, their final goal is $600,000.

The idea of county wide fundraising for local non-profits stemmed from the Blue Grass Community Foundation in Lexington, Kentucky and Baker describes it as “a national phenomenon driven by community foundations to promote online giving.”

Baker said, “Everyone goes online and they identify non-profits that are participating that they want to support, they choose the non-profit, they decide on the amount they want to give and they can give to multiple organizations with a transaction of their credit card.”

There are 265 non-profit organizations in Boone County that have more than 50,000 dollars of annual income. Out of those 265 organizations, about 70 percent of them are participants in the CoMo Gives campaign. Once the campaign is over, all funds raised go directly to the organization which raised the money.

Baker said, “CoMo Gives is a great campaign structure; it’s like skeleton, a skeleton structure for these organizations. Many of them are not big enough to have development staff, or to have the kind of time to create a campaign on their own.”

Yet the CoMo Gives Campaign allows these non-profits “to collectively join the spirit and energy of other organizations in this larger campaign structure, which makes it a collaborative effort that feeds off of each other.”

The “We Always Swing” Jazz Series is leading the pack with over $41,000 in donations.

“It helps us to sustain the mission of the jazz series: to present, to promote and to preserve jazz.”

Chittum said the key to their success over the past month didn’t begin in December, but rather with their brand, by giving the people a product, service and organization that they want to support.

“It’s been an interesting challenge of trying to track down someone in West Virginia or Arizona, that maybe likes jazz, maybe has community ties, or someone that used to live in Columbia, and say ‘Hey, we’ve got this fun idea where we’re trying to raise 50K from 50 states,’” Chittum said.

Chittum said they may not make their goal of $50,000, but they are on track to meet the requirements of the additional challenge grant, in which the Community Foundation of Central Missouri donates an additional $2,000 to the non-profit with the highest number of individual donors.

Chittum said it’s a great way to get non-profits involved in the community.

“We view it as a friendly competition among area non-profits to see who can raise the most money.”

The final day to give to the foundation is on Sunday, December 31st, and donations can be made to your favorite non-profit online.