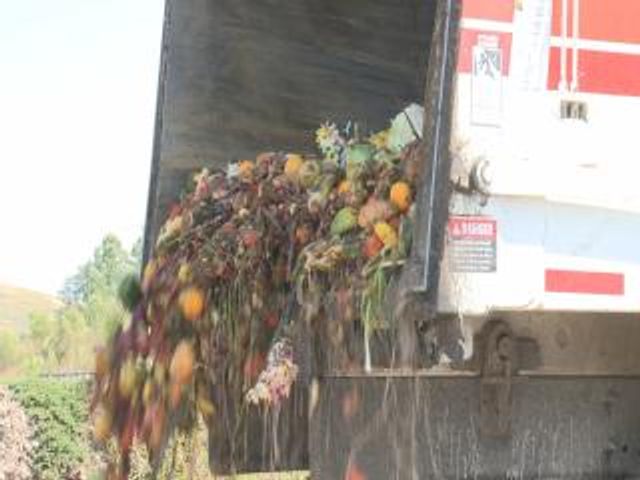 COLUMBIA - A new waste truck for the city means many food and plant scraps from many businesses could end up in local gardens.

A city waste management supervisor said a recent grant from the Mid-Missouri Solid Waste Management District would provide a good chunk of the money for the truck, which will collect compostable material from businesses.

"We want to encourage any business that is generating food waste," Layli Terrill said. "It isn't just the big box stores. Restaurants, businesses that have cafeterias, they are also welcome to join the program. With the new truck it's going to be much easier to collect from all these other entities."

Columbia has one truck already. But Terrill said it is long due for an upgrade.

"It's not so much that it was old, it's that it wasn't designed to collect food waste," she said. "So it's just not efficient."

The truck collects old food and plants from businesses all around town, including Sam's Club, all three Walmarts and the Hy-Vee on Nifong Boulevard.

Leigh Lockhart, the owner of Main Squeeze on Ninth Street, said she prefers to do the composting herself. Lockhart said she is frugal by nature, and started composting to reduce the waste she uses.

Instead of trashcans, her store has bins scattered throughout the restaurant where food scraps get thrown.

Lockhart takes those bins back to her house, to a 30-yard long composting facility.

With organic items like banana peels, uneaten salads, egg shells and dead plants, the compost piles will "cook" over time and eventually turn into rich soil. The material comes full circle then, as Lockhart takes the plants and vegetables she grows and uses them in the restaurant.

Lockhart said she loves composting, and thinks allowing the city to pick up compostable waste from businesses would be great for the environment. However, she also said she thinks others many find it hard to catch on.

"I think most restaurants would think it was odd to store garbage in house for a period of time," she said.

Both Terrill and Lockhart said they would also like to see households, as well as businesses, collecting compostable material for pick up.

"It would be a major increase in resources because it would essentially be adding another route," Terrill said. "So we would need additional trucks, manpower, things like that. It's not in the near future but I think someday it will absolutely happen."

For now, Lockhart encourages people to just compost at home for their own lawns and gardens.

"You don't need much of a space at all," she said. "You just need a little enclosure that gets air into it. Then everyday you just throw whatever you have, you clean out the fridge, just take it and throw it in there. Keep a bag of leaves handy or grass clippings or manure if you can. And you just put a layer of that on top of that, then add some more food then layer it. Next thing you know you've got this beautiful soil. Just stick a tomato plant in it and grow a beautiful tomato."

Terrill said she hopes to have the new truck purchased within six months. Funds from the $53,500 grant, along with $35,000 from the solid waste utility, will pay for the new truck.