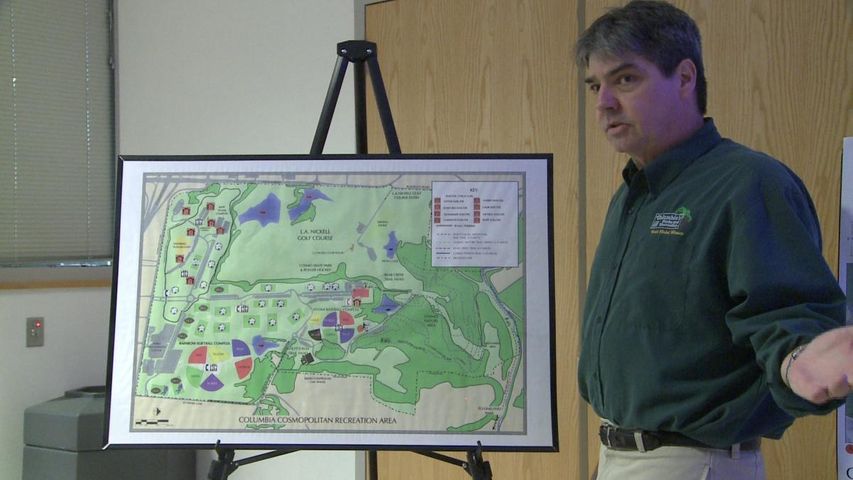 COLUMBIA - Columbia Parks and Recreation hosted a meeting on Thursday evening to discuss the proposed amenity improvements to Cosmo Park. The current plan is to install lights above the football and lacrosse fields, add a concession stand, and construct two restroom facilities.

The lights will allow the teams to hold practices for a longer duration and extend their season later into the fall. The concession stands will provide a method for the programs to fundraise in order to pay for their operation costs. The restrooms will replace the portable facilities currently being used.

"They've got to set up tents, and trailers, and haul stuff in," Mike Griggs, Park Services Manager, said of the current conditions. "It's really not a good aspect at all. So, really, what this does is meet a lot of needs of soccer, football, lacrosse, parents, kids, spectators that we're currently not meeting right now."

Griggs explained the project would benefit the community as a whole.

"It's not just the football, soccer, and lacrosse kids. It's for everyone who utilizes Cosmo Park," Griggs said.

Sales tax will fund the project. The lights will cost $150,000. There is $125,000 allocated for the restrooms and concession stand, but the project is looking to various organizations to donate in order to secure full funding.

"They've been asking for it for a long time. Really, we never had the funding source until the last ballot issue. So we put it on the list of ballot issues in 2010, the voters approved it, and now we're ready to implement the funding," Griggs said.

"These are the kind of projects that our park sales taxes are really meant for. It's to help with the user groups, the people that came and just watch programs," Griggs said.