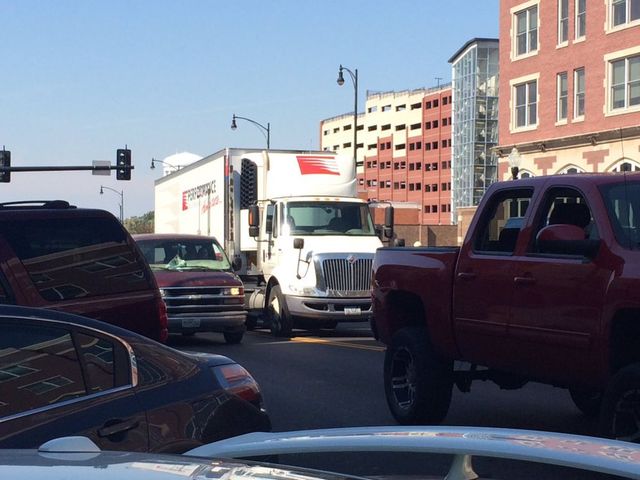 COLUMBIA – Delivery truck drivers in downtown Columbia could soon be prohibited from stopping in the streets during the lunch hour.

The Downtown Leadership Council will discuss Tuesday possible limitations on large trucks that stop for more than a few minutes. The limitations would be only during the noon hour, when trucks can cause greater traffic congestion.

Council Chairman Scott Wilson said some people have not been happy about the problem.

Wilson said delivery trucks cause the most congestion on Ninth Street and Broadway. Stefan Sheffield, a team leader at Slackers on Broadway, said trucks often park in turn lanes.

“I can tell that a lot of people at the stoplights have trouble seeing around some of the trucks,” Sheffield said. “I’m sure it’s really annoying for regular traffic that are trying to turn to get across to park on the other side of the street.”

Sheffield said Slackers usually gets deliveries earlier in the morning. He thinks some businesses might not like it if they have to make changes.

“I can understand how some businesses might want to stay on their schedule,” he said, “but I don’t know what else they’re going to do because the streets are so small.”

Wilson said he is not sure if the Downtown Leadership Council will make any recommendations to the City Council after the Tuesday meeting, but if it does, the council could vote on an ordinance to limit the delivery trucks.