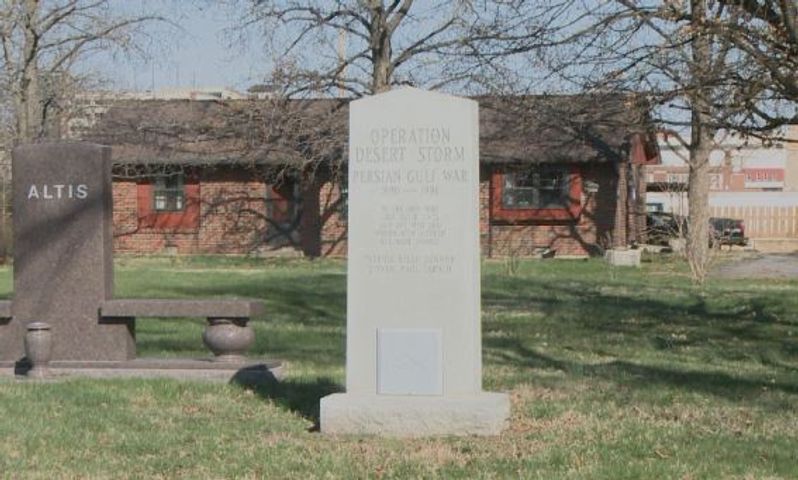 COLUMBIA - The Operation Desert Storm war memorial was moved from the Boone County Courthouse to Columbia Cemetery on Monday.

The Boone County Commission voted to move the memorial in August 2015 because the ichthus symbol, known as a "Jesus fish," is prominently engraved on the front and was seen as a conflict because it was on county property.

The new memorial that was put in its place in front of the courthouse recognizes the service of veterans during the Cold War, Southwest Asia, and the Global War on Terrorism as well as those who lost their lives in those wars.

KOMU's coverage of this story began in 2014 when the Boone County Commission decided to cover the ichthus because of the controversy surrounding religious symbols on county property.

According to a news release, VFW Post 280 voted on March 14 to support the new expanded memorial.

Don Briggs, commander of the honor guard at VFW Post 280, said he personally was not pleased with covering up the ichthus on the memorial and didn't see anything wrong with it in the first place.

"Our country is founded on Christian principles, that's why people came here in the first place," Briggs said.

Janet Thompson, a member of the Boone County Commission, said the Missouri Constitution says the county can't spend resources on the promotion of religion.

"We were able to add a name to the new monument by expanding the scope and moving the old monument to a place that doesn't  have the constitutional issue that the fish, the ichthus symbol, presented," Thompson said.

Thompson added the old memorial is prominently displayed in the Columbia Cemetery near the entrance. The ichthus was put back on to the memorial, and the names of those soldiers are on the new memorial in front of the courthouse as well.