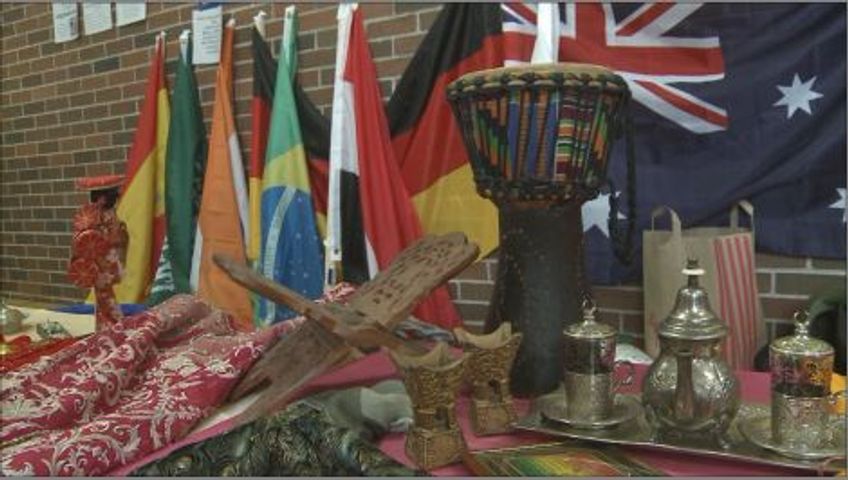 COLUMBIA - Columbia Public Schools wrapped up its Diversity Week Friday with presentations from around the world.

Rock Bridge High School, working with the Columbia Career Center, hosted a Global Village event with displays and foods from countries around the globe. Hickman high school had its version of a Worlds Fair, and Gentry Middle School celebrated Multicultural Day with presentations about diversity and inclusion.

One of the presenters at Gentry was reigning Miss Missouri, Jennifer Davis. Her platform as Miss Missouri has been centered on diversity.

"I love coming to schools. We have to start these conversations when they're young," Davis said.

Davis spoke about her own experience with inclusion and feeling different.

Davis is only the second diverse Miss Missouri. She said it means more to her speaking about diversity because of her background.

"Being a diverse person talking to kids about diversity is so neat," Davis said. "But I don't think you necessarily have to be a diverse person in order to speak about it. Anybody who is willing to be a voice for change can come join my diversity army and take up the cause!"

"They say, 'Oh, I hear you're doing this this week. It's so exciting for my child,'" Bishara said. "And they say 'It's good that you are doing it the same week as Rock Bridge because they are in the same family.' So this is allowing them to have conversations at home about the things they have done at school. It's really neat."

This Diversity Week comes less than a month after the shooting at a Florida high school, and Bishara said now is a good time to talk about inclusion.

"I think it's an opportunity to come together, to show that we care for each other and that we respect each other," Bishara said. "It's important that we do that at all times. The Florida events just remind us that we have to be more caring and more vigilant at the same time."

Rock Bridge and Hickman High Schools' Diversity Week activities were interactive, with booths set up with posters and food from different countries. There were also performers, demonstrating both traditional song and dance from different cultures.

Muskaan Gill is a student at Rock Bridge and performed a traditional Indian dance with her friends. She said she hopes students take away a better understanding of different cultures.

"If we didn't have something like this, people wouldn't know about all these other cultures," Gill said. "Now they can be like, 'Oh, I didn't know this food came from here,' or 'Oh, I didn't know these people wear these kinds of clothes.' It's good that we can come together and learn and integrate these cultures."

"We have about 22 booths in here, another 30 outside, and about 2,000 kids come through and these kids get to showcase everything, all the research they've done," Harlan said.

Harlan said events like Diversity Week are a testament to Columbia's inclusion efforts.

"To have the support of Columbia public schools to do these kinds of diverse things showcases the different atmosphere at these schools and how great it is to be involved with Columbia Public Schools," Harlan said.

In addition to students learning about cultures from around the world, they also helped those closer to home. Students at Hickman raised money during the Worlds Fair, and all proceeds will go to the local food bank.