Craft Breweries on the Rise in Columbia 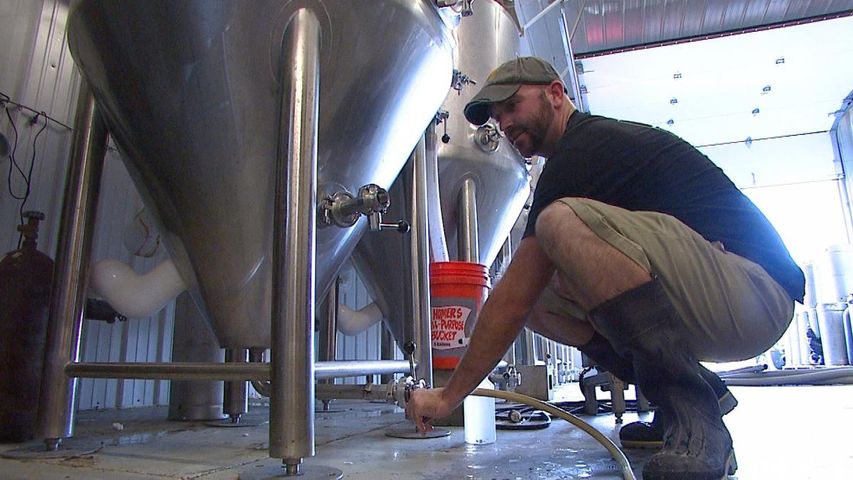 COLUMBIA - More and more craft breweries are opening across the country. According to the Brewers Association, there were 409 brewery openings in 2012 and the industry grew 15 percent by volume. A craft brewery is one that produces a limited amount of beer.

You'll find a similar trend in Columbia. During the next couple of years you can expect to see three breweries on the rise. This does not include Broadway Brewery or Flat Branch Pub & Brewing, which are considered "brewpubs" because they also have a restaurant.

One of the new brewers in town is Rock Bridge Brewing Co. Like a kitchen on Thanksgiving morning, this local brewery is constantly in motion.

"Owning your own business is very much more unpredictable, little more chaotic. Sometimes we work 12 hour days," said Dave Brouder, one of the co-owners of Rock Bridge Brewing Co.

Brouder said the long days are worth it.

"I think the best part is just seeing other people enjoy it, being able to go to a bar or a restaurant and see a product that we worked on is actually being sold there and people are actually buying it," Brouder said. "It's really satisfying to see kind of the end result."

This brewery is inside a hot storage unit off of Big Bear Boulevard, reaching temperatures in the 90s.

"We are two dudes in a storage unit sweating most of the days," Stu Burkemper said, the other co-owner of Rock Bridge Brewing Co.

The steamy unit is the birthplace of this brewery.

"We've always wanted Columbia to be a beer destination anyway. So we're trying to help with that trying to get the craft brew scene more focused on Columbia," Brouder said.

Brouder began brewing beer as a hobby at home.

He abandoned a 13-year insurance career to jump into the brewing industry.

"I would never go back to a corporate job, not after doing something like this."

Brouder needed help to bring his dream to life, so that's where Burkemper comes in.

"My wife came home and I told her I said, ‘Hey, there's a new brewery opening in Columbia, what do you think?' She said,'Oh, that sounds good, did you apply.' ‘About six hours ago,'" Burkemper said.

He went to brewing school in Chicago, trained in Germany and worked for O'Fallon Brewery in St. Louis before he also tried out a corporate career.

"Then I was in corporate world for a couple of months and then I just two weeks into it, I realized I couldn't do it," Burkemper said.

Pursuing their brewing passion is no easy task.

"It's really stressful. Had to do without a lot of things, ever since we've started I haven't really taken a vacation," Brouder said.

"It's been exciting, stressful. Beer helps at the end of the day," Burkemper said with a laugh.

Right now, their beer is on tap at some local restaurants and you can come by and fill up a growler, but this pair couldn't help but want something more.

"Craft only is limiting," Burkemper said. "Once we have cans, we can distribute to a wider area and hopefully nationwide eventually."

With these dreams, their storage unit quickly became too small and a new nearly 18,000 square foot building became just right.

"It's real exciting. We're just really ready for the equipment to be here," Brouder said.

This fall the duo's brewery will move into an old steel factory. They'll brew 15 times more beer, and start canning it. They hope to distribute their dream nation wide, a dream nurtured here in Columbia.

"Columbia supports the locals, local guys. We've gotten a lot of support from them," Burkemper said.

"It's a wonderful thing to be able to control your own time and your own business," Brouder said.

A business built on the guts to dream big and a shared love for a good drink.

"Just to continue to make good quality beer, to be around in 20 years," Brouder said.

Two other breweries are coming soon to Columbia. Logboat Brewing Company and Bur Oak Brewing Company. Logboat is set to open at 504 Fay Street, the former Dale Diggs Meatpacking Plant near Walt's Bicycle Shop. The building is currently undergoing major renovations after being vacant for more than a decade.

Owners expect the building to be ready to start brewing beer before the end of this year. They plan to allow customers to purchase the beer from the brewery tasting room and from other places in Boone County. The founders of this brewery include Tyson Hunt, Judson Ball and Andrew Sharp, all from Missouri.

"We will have a garden and eventual greenhouse, picnic area with room for yard games including croquet, bags and polish horse shoes," Sharp said.

Josh Rein will serve as the brewer. He used to work as the brewer for Broadway Brewer and was the assistant brewer at Flat Branch.

Bur Oak Brewing Company will open later this year around December. The brewery will be located in the Tradewinds Industrial Park area, east of Columbia. The facility is 15,000 square feet, which will give the business space to expand. Craig Stichter, president of the brewery, said the company plans to start out brewing three different beers including a wheat, IPA and brown ale.

Stichter previously worked at the University of Missouri-Columbia in campus facilities as a project manager. He said he's always had an interest in craft beers and did some home brewing of his own in the 90s.

"I knew that someday I would probably leave the university looking for an entrepreneurial opportunity," Stichter said. "When I decided I wanted to open my own business, I decided obviously that would be craft beer."

Bur Oak will have two brewers. The head brewer comes to Columbia from Lost Coast Brewing out of California.

Bur Oak will first only be available on tap at bars and restaurants in Columbia and Jefferson City. Stichter said the company should start bottling its beer by the end of 2014. He said the growth of craft breweries in Columbia only makes the city more attractive.

"I think it's great. Columbia's going to be instantaneously well served," Stichter said. "I think it's going to draw a lot of attention to Columbia as a destination, beyond what we already have. I think this is yet another complementary type of business to our area."