Creator of the Magic Tree: "It just makes me feel really good to do it" 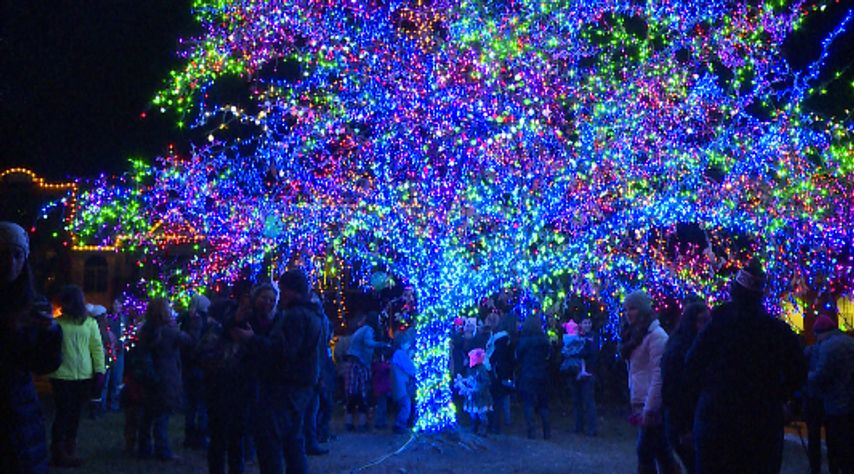 COLUMBIA - The Magic Tree has become a tradition in Columbia, but it is one that never grows old, especially for the man who creates it.

This year's tree has 45,000 lights, and this is the first year all of the lights are LED. Randy Fletcher, who calls himself  Will Treelighter, spent 62 hours decorating the tree this year.

"It was just on a whim about 22 years ago now I put, you know, I was tired of putting lights on my house, and I've seen trees where the trunks were wrapped," Treelighter said. "I thought, "Well, why not wrap them all  the way out to the ends of the branches? I think that would look really cool.'"

Treelighter decided to move the official tree to the Village of Cherry Hill in 2010 after they asked him to make a tree for them, too.

The name for the tree actually came from a family that enjoyed going to see it.

"The idea came to me from a family who dropped a letter to me in my little donation box that I had out at the tree at my yard, and they told me about how their family came every night to see what they called the Magic Tree, and the kids would, you know, beg to come a see it every night, and they'd be in their pajamas in the car, and, you know, they'd come out before bedtime every night."

Treelighter now does other trees, like the one in downtown Columbia.

"Everybody calls them magic trees because the name has just stuck I guess, you know, and anybody that sees a tree like the Magic Tree calls them a magic tree, and at first, I resisted that because I wanted the Magic Tree to be a special tree, you know, but it was useless," Treelighter said. "It is flattering that something like this has stuck and spread, and people want me to do other trees in other places."

Even people visiting Columbia come to see the Magic Tree.

"I'm in town for the weekend because I'm in the National Guard, and my sister and brother-in-law live in town," said Ernest Angelbeck, who went to see the official tree lighting. "They told me about it, so I figured why not?"

Angelbeck said he had never seen anything like it before.

"She said there was going to be a lot of lights, and I didn't realize the scope of it. It's pretty cool," Angelbeck said. "It is magical."

Treelighter said he hopes people that come to see the tree get as much out of it as he does creating it.

"I really enjoy doing the Magic Tree every year. I love the fact that so many people seem to appreciate it and come out to enjoy it, and it just makes me feel really good to do it," Treelighter said. "I hope that what people get out of it is a sense of peace and joy."

The Magic Tree will be lit until Jan. 6.