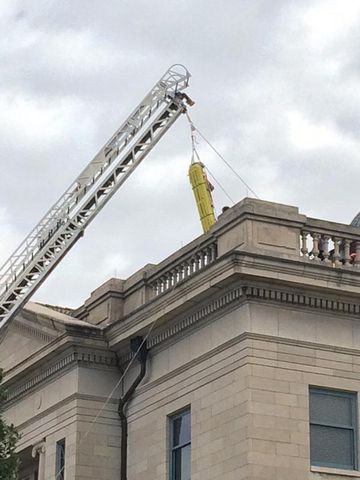 COLUMBIA - Emergency crews rescued a man Thursday morning who slipped on top of the Boone County Courthouse and fell into the building's dome.

Officials said the man slipped and fell while he was lowering the courthouse's flag to half staff in remembrance of State Rep. Randy Pike who died over the weekend.

The rescue began inside the courthouse, but when the indoor operation failed, Columbia firefighters raised a rescue ladder outside the building.

Fire crews got the man out of the dome on a rescue backboard and safely lowered him down the building vertically.

Officials said the man is not in critical condition, but couldn't say the extent of his injuries.

The man, whose name has yet to be released, was on his way to the hospital immediately after the incident.