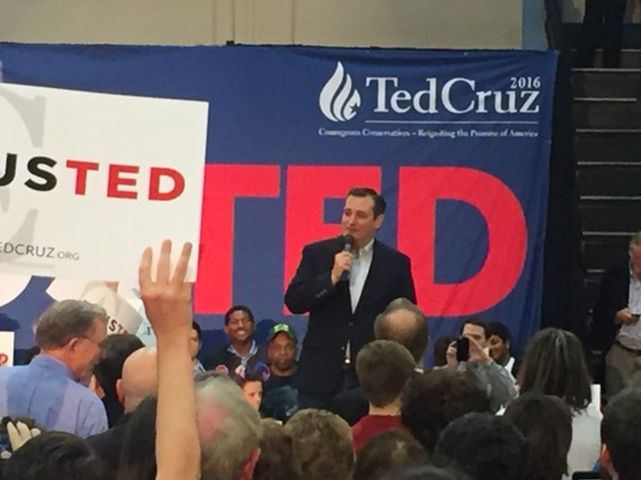 BALLWIN — Presidential candidate Ted Cruz said he would beat Donald Trump in Missouri just days ahead of the Tuesday primary.

Cruz spoke at his rally Saturday at Parkway West High School to a crowd of what he said was about 3,000 people. Carly Fiorina stood by his side and gave a speech that introduced Cruz.

Fiorina said Cruz had the 3 qualities she was looking for in the next president.

Cruz said he was the best candidate because of his beliefs about jobs, freedom and security for the country. He said he is currently neck-and-neck with Donald Trump in Missouri.

Several times throughout his speech Cruz said he was the only viable Republican candidate to beat Trump in the ballot box, and the only Republican nominee that had a chance at beating Hillary Clinton in the general eleciton.

Cruz said he thinks people are looking for solutions to problems and said Donald Trump only points out the problems.

"We don't live in the world of make believe, this decision is not 'My Little Pony' there's not a spell that Donald Trump can just wave his wand to make it happen," Cruz said. "If you wanna see wages going up, you've got to understand where jobs come from in the economy."

Cruz said he thought what happened at the Trump rally in Chicago Friday night was "sad."

KOMU 8 spoke to several of the supporters who showed up hours before the speech began, and a few people who were there to protest the event.

One Cruz supporter, Scott Lane, was at the Trump rally Friday, and said the atmosphere was completely different than the one he felt at the Cruz rally Saturday.

"Well, actually the mood here is a lot more laid back and a lot more Presidential," Lane said. "I believe [Cruz] is a strong conservative and stands for the values our country was built on from day one. Things like the Second Amendment, pro life, fiscal responsibility and having a strong national defense."

Another Cruz supporter, Craig Biernbaum, also said he thought Cruz was better for the job than Trump.

There was no sign of protesters until after Cruz had given his speech, but a few people showed up afterwards to protest his ideas.

An altercation started outside after the rally between several protesters and supporters @KOMUnews pic.twitter.com/ZOJVeb0dUc

Bernie Sanders supporter Alexandria Lane-Detwiler was there to protest Cruz's stance on women's rights and more.

"I think our country is about inclusion and diversity and the acceptance of that," Lane-Detwiler said. "We're all humans first, and if you're gonna vote and live in the same country you should be able to discuss your beliefs together. That's what this country is supposed to be about and I don't think Ted Cruz stands for that."

The final delegate count for Missouri will be decided on Tuesday after the Republican primary.